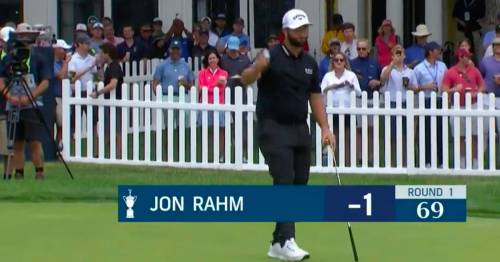 Jon Rahm remains right in the mix to defend his US Open title despite having his ball stolen by youngsters on the 18th hole.

Rahm, 27, was level par as he headed down the last, and despite missing the fairway was left well placed to play an approach into the green. However, when he arrived at the spot where he was sure his ball had landed – it was nowhere to be seen.

Playing partners Collin Morikawa and James Piot were none the wiser as to what had happened, but fortunately for the Spaniard, spectators had witnessed where the ball had landed. It just hadn't stayed in its resting position for long, that's all.

Two opportunist fans had seemingly picked up the ball before scarpering away – but not before Rahm had seen them first. And the world No 2 was able to see the funny side of what went on.

“I am 100% sure I saw the two kids that stole it,” he told reporters, whilst chuckling. "Somebody — I’m pretty sure I know who it was. I recognised the two kids that were running the opposite way with a smile on their face.”

It was perhaps easy for the two-time Ryder Cup player to put a positive spin of the incident given his remarkable recovery. After being given a free drop, he landed his approach 21 feet from the flag before nailing his putt to finish one under par.

"I’m just really happy somebody spotted the ball first" he added. "We knew exactly where it was. Off the tee I was comfortable. I was past all the trees.

"After the free relief, I had 135 yards to the pin, in an area where the rough wasn’t that thick. I don’t think they expected anybody to hit it there or be around there, so I was able to drop it in an area that was a little downgrain, and I wasn’t in jeopardy of carrying the bunker. That wasn’t really a concern."

Rahm heads into round two in Brookline just three shots off surprise leader Adam Hadwin. The Canadian shot a 66 to finish four under par, one clear of a group of players that includes Rory McIlroy and English golfer Callum Tarren.

England's Matt Fitzpatrick and Justin Rose are two under, whilst world No 1 Scottie Scheffler is level par. But it was a nightmare day for Phil Mickleson, with the 'leftie' eight over par after a turbulent round.

Mickelson is making his first start on American soil since being embroiled in the saga surrounding the Saudi-backed LIV Golf Invitational Series, was given a favourable ovation upon teeing off. However, things turned sour when he dropped three shots in the first five holes.

And his day was signified by a calamitous sixth hole, where he four putted the green to turn a birdie chance into a double bogey. Dustin Johnson, who resigned his PGA Tour card last week in favour of Greg Norman's venture, fared much better as he finished two under.

Previous : Phil Mickelson in US Open nightmare as Saudi rebel four-putts from close range
Next : Boy, 9, dies in scrambler bike crash with 13-year-old in critical condition