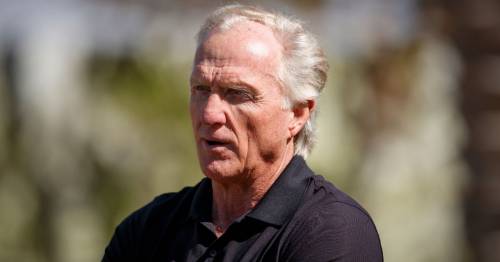 LIV Golf chief executive Greg Norman has taken aim at the PGA Tour, after it denied applications from players who had applied for release to compete in the opening event of his Saudi-backed series. The inaugural LIV Golf Invitational tournament kicks off at the beginning of June, and it was expected to contain a number of PGA Tour stars.

The likes of Phil Mickelson, Sergio Garcia and Lee Westwood all openly revealed that they had applied for permission to play in the Saudi-backed event at Centurion Club next month. And the Tour was expected to grant permission under the grounds that the breakaway event was not taking place in the United States.

However, in a dramatic turn of events, PGA Tour commissioner Jay Monahan denied those hoping to compete in the rival series opener.

In a memo sent to players on Tuesday, Monahan said: “We have notified those who have applied that their request has been declined in accordance with the PGA Tour Tournament Regulations. As such, Tour members are not authorised to participate in the Saudi Golf League's London event under our regulations.

“As a membership organisation, we believe this decision is in the best interest of the PGA Tour and its players." Unsurprisingly the Saudi-backed series’ CEO Norman is less than impressed with the stance, and has taken aim at the American-based circuit, accusing them of breaking the law.

In a statement the former world No. 1 said: “Sadly, the PGA Tour seems intent on denying professional golfers their right to play golf, unless it's exclusively in a PGA Tour tournament. This is particularly disappointing in light of the Tour's non-profit status, where its mission is purportedly to promote the common interests of professional tournament golfers.

“Instead, the Tour is intent on perpetuating its illegal monopoly of what should be a free and open market. The Tour's action is anti-golfer, anti-fan, and anti-competitive.” In spite of the setback, Norman has warned Monahan and fellow PGA Tour chiefs that his new breakaway series will ‘not be stopped’.

Do you think PGA Tour players should be allowed to make the switch? Let us know your thoughts in the comments section below.

Norman confirmed that the series would 'not be stopped'
(

He continued: “No matter what obstacles the PGA Tour puts in our way, we will not be stopped. We will continue to give players options that promote the great game of golf globally.” The announcement came just hours after Norman had revealed the series had received an extra £1.6billion in funding from Saudi Arabia's Public Investment Fund.

The League had already previously revealed the mouth-watering prize money on offer to those that compete in the opening seven events of the series. As a result a cool £3.2 million will be collected by the winner at the 54-hole, no cut events, with just under £100,000 still going to the player in last place.