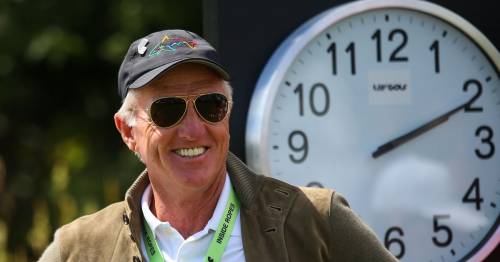 Greg Norman has scathingly criticised the PGA Tour for its "deafening" hypocrisy as the explosive fallout from his Saudi-backed rebel tour continues.

The inaugural Liv Golf Invitational event took place at The Centurion Club at St Albans this month, with winner Charles Schwartzel pocketing £3.2 million. That figure was £600,00 more than English golfer Matt Fitzpatrick made for his dramatic US Open triumph on Sunday.

The PGA Tour was dealt a seismic blow when former world No 1 Dustin Johnson confirmed he was resigning his membership to sign with LIV Golf, with the likes of Phil Mickleson, Ian Poulter, and Lee Westwood amongst the field who played in St Albans. Former major winners Bryson DeChambeau and Patrick Reed will also make their LIV debuts in the second event in Portland in July.

The PGA Tour have responded by barring all players involved from playing in their events, although they are still eligible for major championships. And at the opening event, those involved were subjected to tough questions from journalists on the notions of sportswashing and greed.

And American NBC sports broadcaster Bob Costas poured further fuel on the fire last week when he described the funds on offer to Norman's players as 'blood money'. His wording angered Norman, who has remained defiant in the face of mounting criticism.

And in his latest rant, he cited the PGA Tour's own Saudi involvement: "Look, if they want to look at it in prism, then why does the PGA Tour have 23 sponsors doing 40-plus billion dollars' worth of business with Saudi Arabia?" he told Fox News.

Greg Norman at The Centurion Club earlier this month

And the Australian, 67, also questioned if the sanctions imposed on those who defected to his own rebel tour would now apply to other personnel: "Will [PGA Tour commissioner] Jay Monahan go to each and every one of those CEOs of the 23 companies that are investing into Saudi Arabia and suspend them and ban them?

"The hypocrisy in all this, it's so loud. It's deafening." As for the 'blood money' suggestion, the former two-time major champion replied: "I'm disappointed people go down that path, quite honestly."

The format for the Liv Golf events has come under scrutiny, with tournaments consisting of 54-holes, no cut, and shotgun starts. A team competition also runs alongside the individual event.

World no 2 Jon Rahm admitted ahead of the US Open last week that the concept didn't appeal to him. And sure enough, fittingly, the tournament at Brookline provided a thrilling conclusion.

It was English golfer Fitzpatrick who took the title by a shot from Will Zalatoris, following a sublime bunker shot on the last. The best placed Liv Golf player was Johnson, who was tied 24th on two over par.