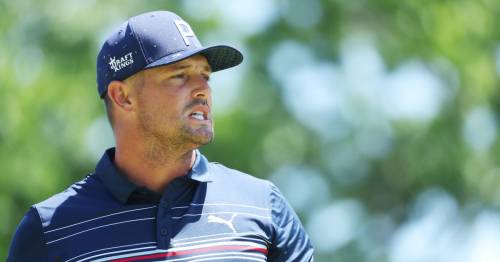 Bryson DeChambeau has become one of the latest golf superstars to turn their backs on the PGA Tour and switch to the controversial Saudi-backed LIV Golf series.

Ahead of the second round of the new series at Pumpkin Ridge in Portland from June 30, DeChambeau has joined along with Patrick Reed and Rickie Fowler – and the American is getting well compensated for it. DeChambeau, the 2020 US Open champion and an eight-time career winner on the PGA Tour, insisted the move to LIV Golf was ‘a business decision, first and foremost’ regardless of the threat of being suspended from his former tour.

On Monday, DeChambeau said: “There was a lot of financials to it and a lot of time. I get to have a life outside of the game of golf as well.”

The 28-year-old was reportedly offered a guaranteed $100 million – approximately £83 million – to join the LIV Golf series which is fronted by Greg Norman. DeChambeau suggested the move was ’a business decision for my family’s future’ and he intends to play the final seven LIV Golf events in 2022.

Given his high-profile status in golf as one of the longest drivers in the sport, DeChambeau has a long list of sponsors and companies he is affiliated with. He uses almost a full set of Cobra clubs at the moment and has done since he signed the multi-year deal back in 2016.

His only non-Cobra clubs are his wedges and putter which are made by Artisan Golf, and Sik Golf respectively while he also uses Bridgestone golf balls alongside Tiger Woods. DeChambeau also has deals with Rolex, NetJets, Bose, OneStream Software, and Bentley as well as working as the face of DraftKings golf products.

According to Celeb Net Worth, DeChambeau reportedly has a net worth of around £8.2m. Across his career, the American has made approximately £20m on the PGA Tour, and he is set to make plenty more with LIV Golf.

Do you think Bryson DeChambeau will win an LIV Golf event this season? Let us know in the comments section.


Dustin Johnson, Kevin Na, Sergio Garcia, Louis Oosthuizen, and Charl Schwartzel – who won the inaugural LIV Golf tournament last weekend – are several names who have resigned from the PGA Tour, and it means two-time major champion Johnson will not be able to be selected for future Ryder Cups. Johnson and Phil Mickelson are among 17 players already suspended from the PGA Tour by commissioner Jay Monahan for taking part in the first LIV event.

Monahan made it clear other players who join LIV Golf would be suspended as well, although DeChambeau said he has not resigned his PGA Tour membership and hoped to keep playing on the tour.

The highly-anticipated LIV Golf series made its anticipated debut at The Centurion Club in St Albans last weekend, with the likes of Phil Mickelson, Dustin Johnson and Sergio Garcia headlining a mixed field in terms of big name pull and talent. Charl Schwartzel, the 2011 Masters champion, secured a one-stroke victory and a £3.86 million payout with a one-stroke victory.

The Saudi-backed LIV series is the most lucrative golf tournament in history: it’s £20 million prize dwarfs the £7 million on offer at the Canadian Open, the PGA Tour event won by Rory McIlroy last weekend. The eight-event series, which is funded by Saudi Arabia's Public Investment Fund (PIF), has a prize pot of just over £200m for 2022, while an extra £1.6 billion has reportedly been secured to expand the event to a 14-event league by 2024.

Previous : Mike Tindall and Zara play fight in Royal Ascot sun as Kirsty Gallacher grabs his face
Next : Millions of Brits will get £650 payment to help with bills – see who’s eligible