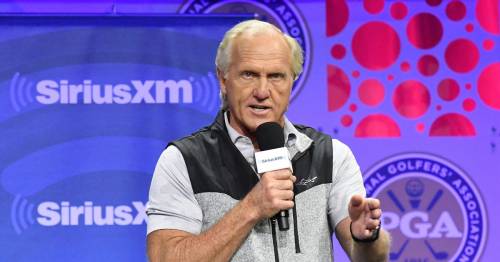 Amnesty International has condemned Greg Norman for his "seriously misguided" views on the murder of Saudi Arabian journalist Jamal Khashoggi.

In 2018, Khasoggi was assassinated in Turkey after criticising his country's government regime. Despite denying any involvement, in 2021 US intelligence agencies concluded that the Saudi crown prince, Mohammed bin Salman, had approved the killing.

And now Norman, already proving a divisive figure as he presses on with his plans to launch a new Saudi-backed golf tour, has invited further scorn with his own comments on the issue. The 67-year-old has been in the UK doing promotional work ahead of the tour's opening event at the Centurion Club in June.

The 'Great White Shark' was furious over the PGA Tour confirming they would not be granting players special release to play in LIV events. But his response to being asked about Khashoggi is unlikely to harbour him much sympathy with golf personnel.

"This whole thing about Saudi Arabia and Khashoggi and human rights; talk about it, but also talk about the good that the country is doing in changing its culture. Look, we’ve all made mistakes and you just want to learn by those mistakes and how you can correct them going forward."

Also asked about the execution of 81 men in Saudi Arabia in March, he added: “I got a lot of messages but quite honestly I look forward. I don’t look back. I don’t look into the politics of things. I’m not going to get into the quagmire of whatever else happens in someone else’s world. I heard about it and just kept moving on.”

Greg Norman's comments have been questioned
(

Unsurprisingly, the comments weren't well received by Amnesty International. Felix Jakens, the company's head of campaigns in the UK, told the Guardian: "Greg Norman’s remarks that the Saudi government’s brutal murder of Khashoggi and its attempted cover-up were a 'mistake' are wrong and seriously misguided.

"Far from trying to ‘move on’, the Saudi authorities have attempted to sweep their crimes under the carpet, avoiding justice and accountability at every turn. The regime’s human rights record is an abomination – from its murder of Khashoggi to recent mass executions and the situation for LGBTI+ people, which continues to be dire."

Phil Mickelson, Lee Westwood and Sergio Garcia are among the star names scheduled to feature in LIV’s tournament in Hertfordshire next month. However, the game's leading stars, Rory McIlroy being one of them, have vociferously opposed the concept.

Jakens went on to describe the LIV Golf Invitational Series as the latest project in a series of "sportswashing exercises that the Saudi authorities are using to clean its blood-soaked image." He added: "Everyone involved in any of the sports events held there, or that are sponsored by Saudi Arabia, must be aware of what is going on in the kingdom and speak out about the government’s brazen abuses.”

Earlier this year, the F1 Grand Prix went ahead in Jeddah despite a missile attack taking place nine miles from the circuit during the Friday practice sessions. Anthony Joshua also regained his world heavyweight titles in the country when he beat Andy Ruiz in 2019.

Companies like the WWE also regularly travel there for PPV events. In football, Newcastle United have also benefitted from major Saudi investment this season.