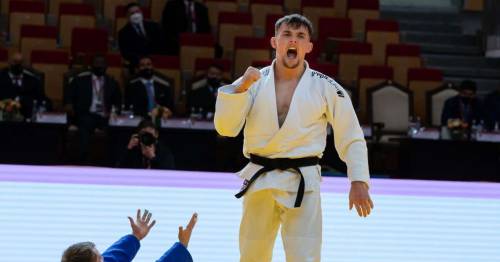 Suicide is a complex and deeply worrying issue in society, and it’s one judo fighter Lachlan Moorhead is looking to tackle.

The 21-year-old, currently Senior British Champion, is joining forces with a charity set up to tackle male suicide after being inspired by the likes of boxer Tyson Fury but also a tragedy that rocked his sport.

Back in 2019, World Judo Champion Craig Fallon died by suicide aged just 36. It had a profound impact on those throughout the sport and, while Moorhead didn’t know him personally, he was a hero to many fighters in the judo community.

“That’s an idol to all British judo players,” Moorhead said. “The guy was world champion and unfortunately he took his own life. There are people like that and the issue is definitely gaining attention because of people like Tyson Fury, who attempted to take his own life as well.

“These are people that are very tough, respected, fighting men that you wouldn’t think would show a sign of weakness.

“Apart from that I also know other people, who I won’t mention, through judo who are respected – and who I saw as very tough as a child in communities in South Yorkshire – who have had similar thoughts. It’s incredibly sad and it’s a difficult conversation to talk about.”

That tragedy, as well as Tyson Fury’s open accounts of his own struggles with his mental health, showed Moorhead that people who often seem fine might not be. Behind the scenes, and inside someone’s head, there can be a lot more going on.

“It just goes to show – Craig Fallon, Tyson Fury – somebody can be champion of the world in a fighting sport and, if it can affect them, then it can affect anyone,” he added.

“It’s why there’s such a big rhetoric around reaching out – that’s where we’re at now.”

The 'man up' stigma

With Mental Health Awareness Week ongoing in the UK the conversations around the problem are currently ongoing, but it doesn’t make the seriousness of the situation any less shocking.

Suicides in particular are at a worrying level. Figures from the Office for National Statistics found the overall sucide rate was 9.8 deaths per 100,000 people from April to December 2020 – lower than 2019 and 2018 – but the data doesn't include 2021 amid fears of what repeated restrictions as a result of the Covid pandemic would do.

But those numbers are still a severe societal problem and, with many of those deaths men, conversations around the reasons behind the issue need to go further.

“The vast majority of suicides are men,” Moorhead said. “There is the ‘man up’ stigma and you can draw comparisons with the toughest of men for that – but what is brave?

“Being brave is doing something you’re afraid of and I think reaching out and having those conversations is brave.”

Reaching out is one of the key messages for the judo fighter. It may be one of the hardest things anyone can do but it undoubtedly helps those who manage it.

"No matter how scary it is to reach out, it's a lot better than taking your own life”

Moorhead has joined forces with charity If U Care Share, which itself was founded by Shirley Smith who lost her eldest son Dan to suicide on Easter Monday 2005. He was someone who had no previous history of mental illness and had never reached out to a GP.

She founded the charity in 2011 with the aims of intervening to prevent suicides and providing family support after suicide and now runs workshops teaching those from seven to 25 the importance of mental and physical wellbeing.

Where to get mental health support in 2022

Mind : A charity offering support and advice for people with mental health problems.

Campaign Against Living Miserably (CALM) : For young men who are feeling unhappy. There's a website and a helpline: 0800 58 58 58

“The main message from me, from what I’ve gathered and learned, is the importance of conversations and reaching out,” he said. “If you know there’s somebody who might be struggling, and you feel like you can’t offer the help, there are loads of charities.

“If U Care Share is just one. There’s loads of mental health charities now because the awareness is so high, and they can find the right way to help.

“But, if you are struggling, just reach out. Think of the right person to reach out to. No matter how scary it is to reach out, it's a lot better than taking your own life.”