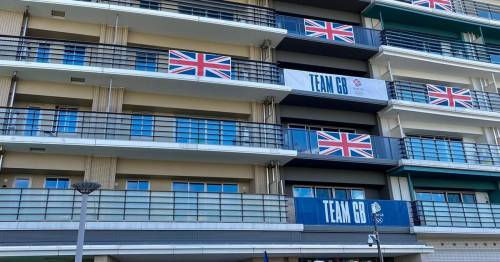 From track and field to track and trace: How Olympics has been eclipsed by Covid

Union Jacks hang from the balconies of Team GB’s 12-storey residential block in the Athletes Village.

The sun is shining, the mercury rising and there are no shortage of happy images peppered across social media.

At first glance this is an Olympics like any other three days out from the Opening Ceremony. It is second glance where the problems begin to emerge.

Behind the face mask and sanitiser regime which has become commonplace the world over, lies an undercurrent of extreme unease.

Athletes, trained to respond cooly to the sound of the starter’s gun, jump out of their skin every time a phone pings.

Never mind track and field, track and trace is the talk of these Ghost Games. Athletes brought up to accentuate the positive, run a mile at mere mention of the word.

There remains significant opposition to the Olympics from locals
(

Fear has stalked the competitors since the first cases of Covid were detected in the Village, where 11,000 athletes from 206 countries are about to mix in the ultimate human petri dish.

There should be confidence in being double jabbed and having negative PCR test certificates coming out of your ears.

But there is none as it offers no protection against being identified as a close contact and forced into isolation, potentially at the cost of your Olympic dream.

“There unfortunately are consequences if [very strict playbooks] aren’t followed, even if it isn’t the fault of the person involved,” IOC spokesperson Mark Adams spelt out yesterday.

Safe and secure is a relative term as Games-related infections have already hit 71 and there is an ever greater groundswell of hostility towards organisers.

Yesterday was the turn of media representatives, snared in the tracing net through no fault of their own, to vent their spleen.

BBC Scotland’s team were frustrated beyond measure to be ordered to spend the next 14 days in hard hotel quarantine.

Back in the Village, beach volleyball trainer Simon Nausch was becoming the third member of the Czech delegation to test positive and removed from the bubble to isolate. Another day another casualty.

Yet so much money has been invested in this project – £11.3 billion the latest estimate – that it feels like the IOC are in to deep to withdraw.

And as they alone have the means to put the juggernaut into reverse no amount of wholly justified concern from the local organising committee is going to bring about a cancellation.

Many in the Japanese capital will have welcomed Toshiro Muto, head of the Tokyo organising committee, indicating that the Games could yet be called off if infections continue to rise.

But nobody is holding their breath waiting for that to happen.

Instead the costliest sporting show on earth proceeds in hope rather than expectation that all will be well.

Andy Murray has checked into the Olympic Village

IOC president Thomas Bach admits to “sleepless nights” and you can bet your bottom dollar he is not alone in that.

This is a huge gamble by those in charge and it’s growing bigger by the day.

Previous : Pat McCormack on Tokyo boxing mission and only an Olympic gold medal will do
Next : When is the 2020 Tokyo Olympics opening ceremony? Start time, dates and full schedule