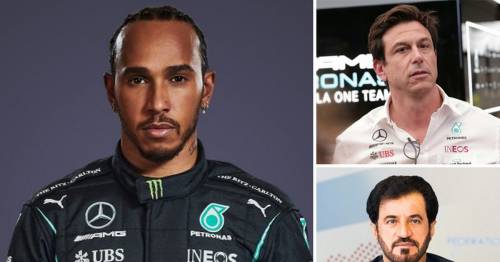 Mercedes team principal Toto Wolff and FIA president Muhammed Ben Sulayem have met behind the scenes to discuss the controversy that continues to mar the Abu Dhabi Grand Prix.

In what was billed as the most anticipated race in history, Sir Lewis Hamilton and Max Verstappen arrived at the Yas Marina dead level on points in their fight for the world drivers' title.

With just five laps to go it was Hamilton who held a commanding 11-second lead, and he seemed destined to take the chequered flag – and win an unprecedented eighth championship crown – before a crash from Williams driver Nicholas Latifi sparked a chaotic sequence of events.

Toto Wolff has met with the new FIA president in private
(

A safety car was deployed and it appeared the race would finish in that manner, only for FIA race director Michael Masi to then speed up the procedure in a bid to ensure one final lap of racing – which culminated with Verstappen overhauling Hamilton in a dramatic finale.

Mercedes launched a protest over what transpired but that was dismissed, and then despite serving notice of intent to appeal, reluctantly opted against that course of action.

However, they did so on the basis the FIA later pledged a full enquiry into the procedure, and that investigation is underway with a view to being finalised at the FIA World Motor Sport Council meeting on March 18, two days before the opening race in Bahrain.

The outcome is thought to be critical to Hamilton's future, and according to the Daily Mail , Wolff has now met Sulayem, who took over from Jean Todt just five days after the season finale, for private talks in Geneva.

It has been reported that no firm agreement was reached between the pair, but the details of the meeting have remained secret – a stark contrast to the FIA’s public promise to be open and transparent with their enquiry. Much of the discussion reportedly surrounded the future of race director Masi.

Lewis Hamilton's future within F1 remains in the balance
(

Mercedes, and Hamilton, are reported to have asked for Masi to be removed from his position in order for the seven-time world champion to continue in the sport – with the Australian having thus far withstood multiple calls from fans for him to retire.

Hamilton, 37, was dignified in the immediate aftermath of the controversy, congratulating Verstappen on his title win, but has since maintained a vow of silence.

Him and Wolff boycotted the FIA prize-giving gala in Paris, with the Austrian telling reporters the British driver was "disillusioned" with what had happened.