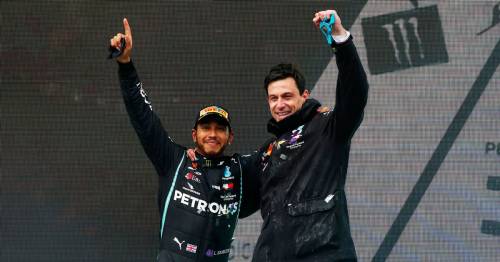 The silver arrows car has been flying since the Sao Paulo Grand Prix last week, as the defending champion stormed to victory at the Interlagos circuit before winning the inaugural Qatar GP yesterday.

Questions have been raised by their rivals Red Bull about Mercedes’ astonishing speed, and suggested they planned to protest their rear wing.

Wolff gladly welcomed any investigation into his team’s machine and now expects another blistering display from Hamilton at the Jeddah Corniche Circuit.

“Saudi should be a good track for us, but we know this year when you think it’s a good one it can turn the other way around,” he said on Sky F1.

“But it’s a long straight, we’ll get our spicy equipment out for Saudi Arabia that we didn’t use [in Qatar] and hopefully Valtteri [Bottas] is right up there, we need him. But in any case, if everyone finishes the race it will go to Abu Dhabi.”

Hamilton was forced to take a five-place grid penalty after Mercedes changed his engine in Brazil, and it proved to be a masterstroke as he fought from 10th on the grid to take the chequered flag.

Following the performance from the last two races, Wolff believes the car is in its best shape as they head towards the final two races of the season.

“Yes, definitely. I think the car is quick on the straight and good around the corners," he added.

“Degradation works fine – even at races in the Middle East and we have two to come of these – on old tyres.

“I think we have to push maximum attack. We have to catch up, make some points up and that’s just what we are going to do.”

Hamilton is determined to clinch a record eighth F1 world title and Wolff says the driver has been galvanised since the victory in Brazil.

“[Lewis] is totally in the zone. The lion has been woken up. They [Red Bull] woke the lion at Interlagos last week.,” he said.

On the pressure of the first real fight Mercedes have endured with a rival time in the turbo-hybrid era, he added: “I really enjoy the ride because it’s such fun when it’s so tough, that’s exactly why we’re in this sport.”

The Briton trails arch rival Max Verstappen by eight points heading into the penultimate race of the season next weekend in Saudi Arabia.

Previous : Neighbours feud after fence put up to stop kids playing football in park
Next : Red Bull boss Christian Horner has no regrets on behaviour after being summoned to stewards