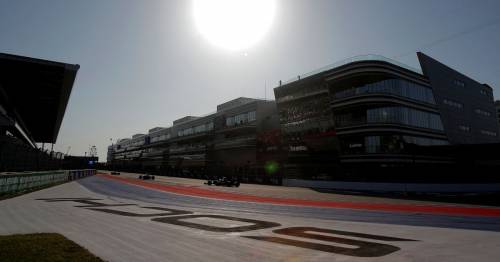 Russian racing bosses are reportedly still "in touch" with the FIA over the future of the Russian Grand Prix in Formula 1.

The sport had planned to head to Sochi once again as part of the 2022 race calendar, but the event was removed from the schedule in the wake of the Russian invasion of Ukraine. That move was followed by Haas opting to sack driver Nikita Mazepin and cut ties with their main sponsor, the Russian chemical firm Uralkali.

Those moves removed all direct Russian involvement in the sport, but a claim has been made that the country's racing bosses remain in contact with motorsport governing body the FIA. Russian Automobile Federation chief Viktor Kiryanov reportedly made the claim to the Tass news agency .

Asked during an appearance at the St Petersburg International Economic Forum if there is a chance the Russian Grand Prix could be revived, he replied: "Only God knows. But we are keeping in touch with the FIA, we still work with them and all regulatory papers come to us from them.

"We are still involved in everything related to motorsport. There will not be Formula 1 now, but there will be many other things. It's not good that there will be no Grand Prix, but it's okay. We will develop our national racing series instead. The [St Petersburg] autodrome has received all licenses from the FIA, it is functioning and we can already hold competitions of any type."

The claim comes after F1 bosses decided against replacing the Sochi race on this year's schedule. It means a 22-race season for 2022, meaning the teams will have an extra week to prepare for a double-header in Singapore and Japan during September.

Turkey and Qatar were both reportedly considered as replacements, but the sport's leaders have opted against both options. Returning to Europe was deemed too much of a logistical challenge, while Qatar was rejected due to the sweltering September heat and the fact the football World Cup will be kicking off just two months later.

The second half of the season will therefore be made up of nine races, beginning with an exciting European triple-header in Belgium, the Netherlands and Italy. After that comes the Singapore and Japan trip, followed by the second visit to the USA of the year for the race at the Circuit of the Americas in Austin.

The final three races are traditional venues for late-season drama, with the Mexican Grand Prix followed by a visit to Interlagos in Brazil. The curtain will come down on the campaign, as usual, in Abu Dhabi, where something special would need to happen to top the last-lap drama which occurred at the end of the 2021 season.

Previous : Labrador had to be rescued after falling off side of 3,000ft mountain
Next : Lance Stroll warned his billionaire dad may sack him if Aston Martin form doesn’t improve