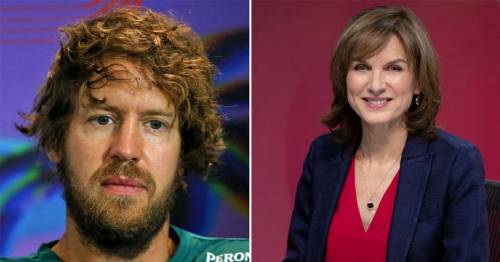 Sebastian Vettel has said he's looking forward to what he described as an "interesting opportunity" ahead of his appearance on BBC One's Question Time this week.

The Aston Martin driver will become the first active Formula 1 athlete to appear on the debate programme, which is due to air on Thursday at 10.40pm. Four-time world champion Vettel, 34, has garnered attention for his willingness to speak on worthwhile causes over the course of his 15-year career.

Most recently, the German wore a t-shirt during race week at the inaugural Miami Grand Prix, which read 'Miami 2060, 1st grand prix under water, act now or swim later’. The slogan acknowledged the climate change debate and the impact motorsport has on the environment.

As well as shining a light on rising sea levels, Vettel has also spoken up on behalf of alternative sustainability measures, LGBTQ+ rights and other causes. That being said, he's not eager to focus on any singular issue when he appears alongside host Fiona Bruce.

“I don’t know, I’m fairly open," said Vettel ahead of the show. "But yeah, I think it’s a difficult… not a difficult, a different format. And yeah, looking forward to it. I think there’s a lot I can learn. Obviously, I have my opinion. I’m not saying it’s always right or wrong.

Who do you think will be crowned F1 champion for 2022? Let us know in the comments section.

Vettel was the first driver to say he would boycott a Russian Grand Prix following the country's invasion of Ukraine, not long before this year's Sochi stop was removed from the schedule. Speaking to Sky Sports about his choice of apparel in Miami, the former Red Bull and Ferrari star said he found it "very disturbing" to race in a city "that will not be here in 50 years" due to rising sea levels.

The F1 veteran—who sits 14th in this season's standings—has also sported rainbow colours in support of the LGBTQ+ community, opposing Hungary's discrimination of that demographic last year. He was told off by the FIA for wearing a rainbow t-shirt that said 'Same Love' during the 2021 Hungarian Grand Prix when the country was voting on an anti-LGBTQ+ referendum.

Thursday's episode of Question Time is filmed in Hackney and will also feature Labour MP Shabana Mahmood and Conservative Suella Braverman. Economist Miatta Fahnbulleh and comedian Geoff Norcott will complete the panel as Vettel makes a different kind of debut.

Previous : Mercedes see ‘changing of guard’ as Lewis Hamilton told George Russell usurps him as No 1
Next : Iowa teen charged with killing teacher to be tried as adult