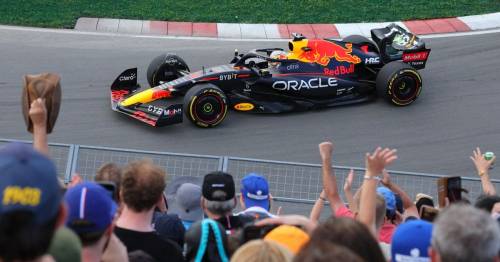 Defending world champion Max Verstappen has continued his impressive Formula 1 run, after securing victory at the Canadian Grand Prix. Verstappen put in a professional showing to further cement his spot at the top of the driver standings, meanwhile his long-time rival Lewis Hamilton secured just his second podium of the campaign by finishing third.

Verstappen began the race with F1 veteran Fernando Alonso on his tail, after the two-time world champion picked up his front row start for the first time since 2012. The rumour on the grid was that Alonso was going to attack from the off and attempt to get in front of Verstappen early on.

The Dutchman though was in no mood to give up top spot, and professional manoeuvred his way through the chaotic early stages to keep his lead intact.

Whilst all was going well for Verstappen early on, the same could not be said for his Red Bull teammate Sergio Perez, who was forced to pull out after just nine laps due to a technical fault. This led to the deployment of the virtual safety car, where the Dutch leader and his team decided to head into the pits.

His quick break momentarily gave up his lead, but in typical Verstappen fashion he was quick to make up the ground and retake top spot just a few laps later. Meanwhile Verstappen's 2021 rival Lewis Hamilton began to make his move, after beginning the race in fourth. As a result, the Englishman overtook Alonso on lap 24 to move into third in the hunt to finally kickstart his 2022 campaign.

Lewis Hamilton got himself back on the podium.
(

The Dutchman meanwhile once again pitted from the lead, and when he reappeared spent time behind old foe Hamilton. The on-track battle between two of the great drivers seem to now be a distant memory, as Verstappen took over the seven-time world champion with ease, with Hamilton knowing his Mercedes just does not have the pace to compete with the firing Red Bull unlike in 2021.

Verstappen then made his way past Sainz to regain top spot, however the Dutchman's job was far from done yet. Drama struck with just over 20 laps to go, as Yuki Tsunoda ended his afternoon early after crashing when leaving the pits. This led to the deployment of the safety car, which of course bunched the field right back together ahead of the restart.

What did you make of the Canadian Grand Prix? Let us know in the comments section below.

Verstappen prevailed ahead of Carlos Sainz.
(

Once back underway the leading Verstappen had Sainz right on his tail in what was playing out to be a real battle late on in Canada. Their cat and mouse race saw the Spaniard constantly breathing down the Dutchman's neck, but Verstappen was not in any mood to lose his spot.

This one looked as if it was going to go down to a last-lap shootout, in one of the fiercest battles of the campaign so far. That it did, but unsurprisingly the world champion was able to keep his cool, as Verstappen went on to secure his sixth win of the season.