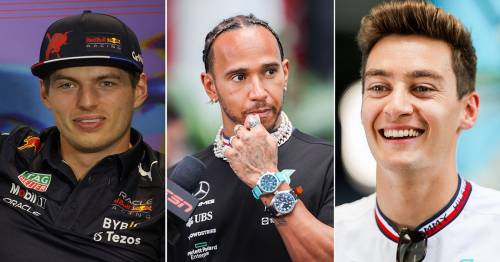 Max Verstappen has questioned Lewis Hamilton's struggles in 2022 by pointing out his teammate his performing well in the same car.

Hamilton, 37, has endured a torrid start to the new season, despite a third-placed podium finish in the season opener in Bahrain. Disaster struck a week later though, when he exited in Q1 in Saudi Arabia before taking P10 in the Grand Prix.

The British driver managed fifth in Australia but had a disastrous weekend in Imola, going out in Q2 and finishing 14th in the Saturday Sprint Race. He crossed the line just one place higher in Sunday's Grand Prix, and was lapped by race winner Verstappen for his troubles.

On the contrary, George Russell, 24, is the only driver to have notched top-five finishes in every race so far. The former Williams man lies on 49 points – 21 clear of Hamilton.

The seven-time world champion has already publicly written off his chance of mounting a title challenge this year, and received a radio apology from Toto Wolff after Imola. And speaking at the drivers press conference on Friday, Hamilton said he didn't expect much improvement this weekend in Miami.

And speaking to the Telegraph in America this week, Verstappen was asked his thoughts on lapping his 2021 title rival: "To be honest, it wasn't something I was enjoying at the time," he said.

Russell has amassed 49 points so far compared to Hamilton's 28
(

"I was just focused on my race, on getting through the traffic as cleanly as possible and winning. I mean, it wasn't like I was, "Oh, I'm lapping Lewis, what an amazing feeling.

'I had great battles with Lewis last year. Now he's in a car which is not so great. Having said that, of course, George [Russell] does finish fourth in that car. So it [the W13] is not all horrific right?'

In pre-season, Verstappen had suggested that Mercedes were "sandbagging" in relation to their performances, to deliberately mislead rival teams. When reminded of that, he made a cynical dig at the Silver Arrows.

"I think there are lots of sandbags somewhere in their car," he joked. Verstappen's primary focus in Miami is likely to be on cutting the gap to Charles Leclerc, and not the pace of Hamilton and Russell.

The Dutchman's win in Imola narrowed the gap to the Ferrari man to 27 points in the standings, with Red Bull's early reliability problems seemingly sorted out. On Friday, the reigning world champion said: "I think you always want to achieve a weekend like we did in Imola, but that's not always the case unfortunately, so let's see what we can do here.

"We have a good car and hopefully we can have a good result again – but on a new track a lot of things can go wrong or go well. It's of course trying to find out what works for you."