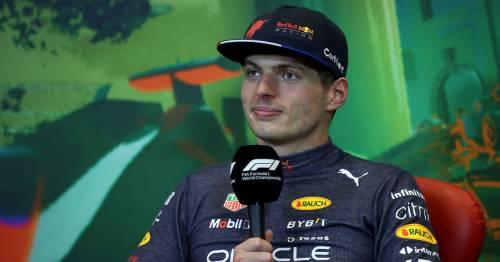 Max Verstappen had little sympathy for Formula 1 title rival Charles Leclerc after his engine failure at the Azerbaijan Grand Prix.

The Dutchman was unchallenged as he coasted to victory in the race, finishing some way ahead of Red Bull team-mate Sergio Perez. The Mexican had struggled for pace and grip during periods of the race, but was still very comfortable in second to bring home the perfect result for the team.

The lack of competition for the win in Baku came as a a result of a disaster for the only other team capable of matching them for performance. Ferrari chiefs watched on bemused and helpless as Leclerc was forced to stop not long after Carlos Sainz had himself retired from the race.

Verstappen, who stretched his lead over Leclerc to 34 points with the win, gave a blunt response when asked about his rival's misfortune. "I would say s*** happens, that's racing, you know?" he told reporters after the race, one year on from his own painful DNF in Baku.

"It happened to me, it happened to many people in the past and unfortunately it's happening to Charles. If I would be in the same situation, I would also be disappointed, I think that's very normal, but it's about how you come out of it."

Meanwhile, the race will have thrown up a lot of worries for Ferrari, both as a team and an engine supplier. As well as losing both their own drivers to mechanical failures, Alfa Romeo racer Zhou Guanyu and Kevin Magnussen of Haas – both in Ferrari-powered cars – also had to retire.

When asked about it post-race, Mattia Binotto admitted it is a concern: "We said it even before coming here in Baku, reliability is always a key factor in the battle.

"As a team, we pushed a lot to develop the car during the winter, but we proved we are not yet fully reliable.

"There is still some work to be done. We didn't get euphoric at the start of the season, we will not be deflated right now. The team will stay focused, work hard and make us stronger for the future."

Previous : Jack Leach told to “follow Andy Murray’s example” to save England career by Monty Panesar
Next : Lewis Hamilton’s back pain battle that left him ‘praying for race to end’