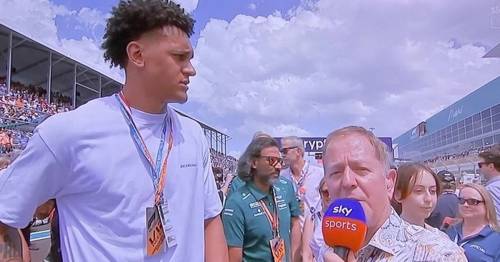 Sky F1 commentator Martin Brundle took to social media to reveal he dislikes doing his iconic grid walks prior to the start of races following his hilarious gaffe at the inaugural Miami Grand Prix.

Brundle, who has been one of the leading voices within the sport for years, has appeared to thoroughly enjoy interviewing completely unwitting celebrities during his grid walks over the years. Last season, he famously had an incident with the entourage of rapper Megan Thee Stallion ahead of the United States Grand Prix in Texas which led to him asking for respect from celebrities attending the events.

However, his grid walk proved to be ridiculously funny on Sunday as the 62-year-old mistook basketball prospect Paolo Banchero for NFL star quarterback Patrick Mahomes in Florida. Amid many celebrities who flocked to the event, Brundle made the mistake as he chased down Banchero while shouting ‘Patrick!’

While interviewing Banchero, Brundle realised he wasn’t speaking to the Kansas City Chiefs star and former MVP. He managed to follow it up by asking for Banchero’s name before stating: “Well, I thought I was talking to somebody else, I’m sorry about that.”

He then followed it up by asking: “What is your name, sir?” Gracious as ever, Banchero told Brundle his name before the Sky reporter responded: “Well I thought I was talking to somebody else, I’m sorry about that.”

The clip of the interview went viral once again, with many people commenting on the blunder including Mahomes himself. Brundle has since tweeted how he doesn’t even enjoy the grid walks.

“There’s a reason why I’ve never watched back an F1 gridwalk in a quarter of a century of doing them,” Brundle tweeted. “You have no idea how much I dislike doing them but somehow those crazy moments have defined my professional career. Oh well, that’s the way it is.”

While he doesn’t have the status of Mahomes just yet, Banchero is one of the heavily touted prospects heading into the 2022 NBA Draft. The 19-year-old is predicted to be a top three pick after starring at Duke, where he averaged 17.2 points along with 7.8 rebounds per contest.

Banchero officially declared for the NBA Draft just a few weeks ago, forgoing his remaining college eligibility. It means the forward will be one of the names available for selection next month on June 23.

What do you think of Martin Brundle's grid walks? Let us know in the comments section.


The error involving Banchero was not the only cringeworthy moment for Brundle, as he twice tried to interview English football icon David Beckham before finally succeeding in speaking to him at the third attempt. DJ Khaled then bumped into Brundle and was his typical self.

“We in Miami, this is my home, the best city in the world,” said DJ Khaled, before Brundle had even asked him a question. “The whole world is here for this beautiful event. F1, family fun, good energy, superstars, icons.”

In typical Brundle style, he responded: “I’m not going to add any more to that. Beautifully summed up sir.”

“Another one!” Khaled shouted, referencing his own saying throughout each of his tracks.