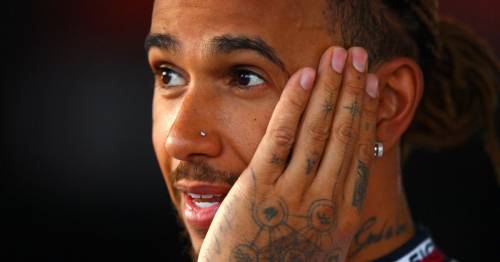 Lewis Hamilton has announced that he was “praying” for the Azerbaijan Grand Prix to end after conditions on the track caused him a nasty injury.

The news comes after the veteran driver finished fourth in the race, missing out on a spot on the podium to his teammate George Russell.

The 37-year-old from Stevenage hasn’t enjoyed the best year so far, struggling to match the pace of the Ferraris and Red Bulls, or even of his teammate Russell.

Despite the eyebrows being raised, Hamilton said in no uncertain terms ahead of the race on Sunday (June 13) that he had no plans to step away from the sport.

Lewis Hamilton appeared to be helped out of his Mercedes after the race, which could lead to punishment from the FIA
(

Ahead of the race he said: "Why should I stop?

"Let’s take this season. I probably won’t win the title, but I feel the same pleasure of competing as when I started.

"Maybe one day I won’t be able to take the pressure any more, I’ll be tired, but that day hasn’t come yet."

What happened to Lewis Hamilton at the Azerbaijan Grand Prix?

Lewis Hamilton suffered a strange malfunction with his Mercedes at the Azerbaijan Grand Prix that caused the car to bounce off the surface of the track, causing agony.

Lewis said: “I don’t want to have that bouncing again. I’ll do anything to avoid having that again.”

He said that the uncomfortable ride made driving safely, let alone quickly, a real challenge.

“The thing was bouncing so much,” he said. “There were so many times I was nearly going into the wall.

“So that was a concern safety-wise at 180 miles an hour, smashing into the wall. I don’t think I’ve ever really had to think about that too much as a racing driver. You don’t really ever think about keeping it out of the wall at high speed. A very, very strange experience.”

Hamilton struggled to get out of his motor at the end of the race and said adrenaline was all that got him over the line.

"That's the only thing," Hamilton said. "Biting down on my teeth through pain and just adrenaline.

"I can't express the pain that you experience, particularly on the straight here. At the end, you're just praying for it to end."

Lewis Hamilton said he intends to race in Montreal this weekend
(

The bouncing caused the seven-time world champion to develop back pain, which has led Mercedes team boss Toto Wolff to suggest he could miss the Canadian Gran Prix through injury.

He said: "You can see that it is not muscular, it goes properly deep into the spine and there are some consequences.

"The solution could be to have someone on reserve, which we do at any race."

Hamilton has been a lot more positive, however, writing on social media: "Seeing online that a lot of people are concerned about me with how awful it looked out there today. It means so much that so many of you are sending love.

"I'll be honest it looks terrible and feels 100 times worse. Definitely some recovering and hard work with the team to do before Montreal to overcome this hurdle. Feeling better already, though, and motivated my to keep pushing. See you next week."

Despite the controversy, which has seen Wolff apologise to the driver over the poor ride, the team pulled off an impressive result overall.

"The team did a great job with the strategy. Once we fix this bouncing, we're going to be right there in a race. We're losing at least a second with bouncing, for sure," Hamilton said.

"I'll be at the factory tomorrow; we've got to have some good discussions and keep pushing."