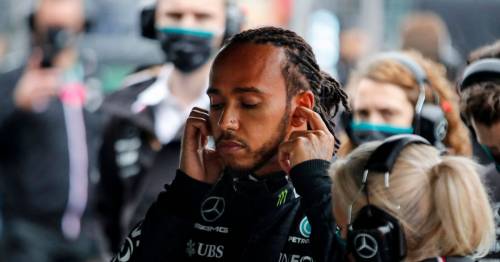 Lewis Hamilton was "heading for a disaster" at the Turkish Grand Prix before Mercedes called him into the pits, according to F1 chief Ross Brawn.

Hamilton, who started 11th on the grid after taking a 10-place penalty for his fourth engine change of the season, had worked his way up to third with just eight laps to go.

The seven-time world champion was adamant he could finish the race on the same tyres with which he started, but was left furious after his team opted for caution and called him in. He re-emerged fifth, a position which he maintained until the finish line with title rival Max Verstappen second.

"The driver is in a bubble," he wrote, in his column for the official F1 website.

"They need to give you information, but what they can't see is all the data being fed to the pit wall.

"In Lewis' case, if he didn't box (pit) and the tyres had gone away or there had been a light rain shower, he would have tumbled down the order and that would have been a disaster.

"Once again teams were faced with a very difficult strategic decision. In these scenarios, you're trusting your judgment, experience and feel."

Brawn, 66, who previously worked at Mercedes as well as famous stints with Benetton and Ferrari, also pointed to the fact Hamilton rejected the chance to pit earlier in the race.

"As we saw with Lewis, there was a fair bit of initial resistance from within the car about pitting.

"When these situations are not clear-cut and you get a push-back from the driver, it's easy for a team to back off what they feel was the right decision."

The 36-year-old's mood was not improved by learning afterwards that Alpine's Esteban Ocon had stayed on his original intermediate tyres for the entire race, despite the damp track.

Hamilton, who was seen heading for the team garage straight after the race to inspect the tyres that were replaced, commented: "If Ocon did it, then I could do it, for sure."

Previous : Lewis Hamilton may face another grid penalty amid Mercedes engine concerns in title race
Next : BOJ policymaker rules out stimulus withdrawal even after economy recovers