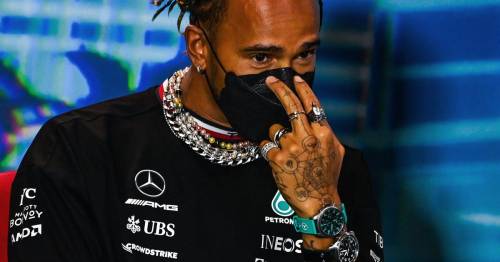 Lewis Hamilton warned he could be banned from Monaco Grand Prix

Lewis Hamilton has been warned his ongoing row with the FIA over their jewellery clampdown "could get very nasty quite quickly".

New FIA race director Niels Wittich has taken a strong stance on jewellery, with the organisations rules stating: "The wearing of jewellery in the form of body piercing or metal neck chains is prohibited during the competition and may therefore be checked before the start."

Speaking before the Miami Grand Prix, Hamilton labelled the move a "step backwards" for the sport and even went as far as to say: "If they stop me, then so be it. We've got a spare driver."

He was later given a two-race exemption to comply with the FIA's ban and removed his earrings, but not his nose piercing. Hamilton's exemption will come to an end at the Monaco Grand Prix and Sky Sports reporter Ted Kravitz has warned the FIA could "stop Lewis from going out of the pit lane at the beginning of Friday practice because he has not been scrutineered".

"He doesn't want to, doesn't think it's something the FIA should be doing, so it looks like the war between Hamilton and the FIA continues.

"Is he going to rack up fines when we get to Monaco and he hasn't taken it out because the hole has closed up? It's not as easy as him being able to just take it out like he can his earrings.

"So there is a little storm brewing. Hamilton has said they can fine me whatever they want, but it's not as simple as that.

"If the FIA decide to not scrutineer the driver, which it looks like they can do, they can stop Lewis from going out of the pit lane at the beginning of Friday practice because he has not been scrutineered – the driver is now effectively scrutineered in the same way as a car is. So this could get very nasty quite quickly in a race-and-a-half's time."

Previous : Prison guard’s final moments captured after 11 days on run with fugitive lover
Next : Boris Johnson hints at windfall tax on oil and gas giants – ‘we’ll have to look at it’