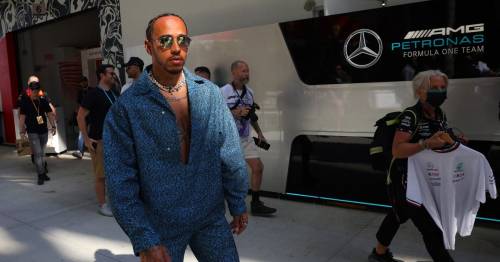 Lewis Hamilton has predicted more struggles for Mercedes ahead of this weekend's inaugural Miami Grand Prix.

Hamilton, 37, has endured a nightmare start to the 2022 campaign, notching just 28 points from four races. After a third-placed podium finish in the season opener in Bahrain, the seven-time world champion has found himself way off the pace as he tries to adapt to his new W13 car.

Last time out in Imola, he exited in Q2 before finishing 14th in the Saturday Sprint Race. He only improved that grid position by one place in the Grand Prix, and to compound his misery, he was lapped by 2021 title rival Max Verstappen.

The Silver Arrows were expected to arrive in the US with upgrades, but Hamilton doesn't envisage a change of form anytime soon. Despite clearly enjoying his week so far in Miami, the seven-time world champion was downbeat when asked what fans could expect from his team.

"You can expect that we will be giving it our all and trying our best," he said, in the drivers press conference. "We've done a huge amount of work in the background, you can see we've got a new rear wing for example.

"So I'm just grateful for everyone continuing to put their heads down. It's an amazing amount of hard work people are putting in." He was then asked if he thought the work would result in him being 'closer to the pace' at the Hard Rock Stadium.

Lewis Hamilton at the drivers press conference on Friday
(

"I don't anticipate much change in that sense," he candidly replied. Indeed, he has already publicly written off any chances of him challenging for an eighth crown this year.

Following his Imola debacle, he received an apology from team boss Toto Wolff, who labelled his car "undriveable." But to make matters more mystifying George Russell has found consistency with his new team.

He's the only driver to have secured a top-five finish in every race in 2022. His efforts have yielded 49 points, 21 more than his more esteemed race partner.

Regardless, Hamilton hasn't looked like a man with the weight of the world on his shoulders this week. And when asked is he enjoyed his time in Florida, he was emphatic with his answer.

"It's been great," he said. "The weather's incredible and we've had such a warm welcome here. So just happy to be out here and I've been out on the water, and the ambiance in the town is incredible."

On Wednesday, he played golf with NFL legend Tom Brady, although was coy about his day out at the Miami Beach Club: "I did something with Tom yeah but I'm not really very good," he joked.