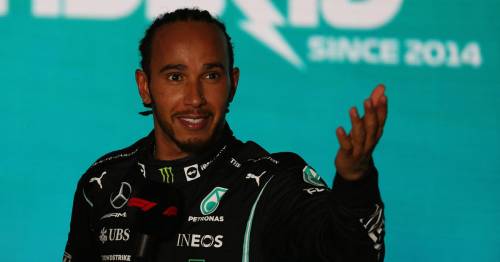 Lewis Hamilton is concerned he and F1 title rival Max Verstappen might be involved in another crash as the pair reach the climax of their enthralling fight to take the 2021 crown.

After wins in the USA and Mexico, it looked as though the Red Bull racer had opened up a gap that would be difficult for Hamilton to claw back.

But the Mercedes ace has been on a whole other level in the two most recent Grands Prix, driving from 10th to win in Brazil before dominating proceedings in Qatar.

Just eight points separate them now with two more races to go, and Hamilton appears to have the momentum he needs to climb back above the Dutchman by the time the chequered flag is waved in Abu Dhabi.

The Brit has the form and the skill to do exactly that, but he is wary that one thing which could scupper his title hopes would be another crash.

He and Verstappen have already been involved in one high-profile incident which resulted in both drivers being left stuck in the gravel and unable to continue at Monza.

And that came after contact between the pair sent Verstappen hurtling into a tyre wall at Silverstone, while Hamilton went on to win the race.

Another potential flashpoint came at Interlagos when the Red Bull man seemed to push his Mercedes rival very wide on one corner, with both racers completely off the track, but fortunately there was no contact.

Hamilton, who is going in search of an unprecedented eighth world title, hopes that will continue to be the case as they prepare to do battle again in Saudi Arabia and the UAE.

"You just have to be very, very wary – more wary than ever before," he told the BBC when describing what he has to do to avoid such a catastrophe.

"Rather than giving someone the benefit of the doubt, you have to know that's what's going to happen.

"So you always have to be ready to avoid a collision at all costs, [even] if it means going wide, because you want to see the end of the race, right?

Max Verstappen is gunning for his first F1 world title
(

"If you're stubborn and you hold your ground, you're going to crash. So that's what I've just tried to do. I've tried to make sure I avoid the collision.

"And I think I've been pretty decent at it in most scenarios. You can't always get it perfect."

If the two racers are able to keep it clean in the final two rounds of the season, Hamilton is confident he is in a good place to press home his current advantage of momentum after some difficult moments this campaign.

"The first half of the season was one of the toughest I would say, that I've had," he added. But right now I feel better than I've felt in a long time. So somehow I've managed to push through it."

Previous : Woman who dresses as real-life Victorian is mistaken for a princess by strangers
Next : Nearly 200,000 Californians could be without power on Thanksgiving