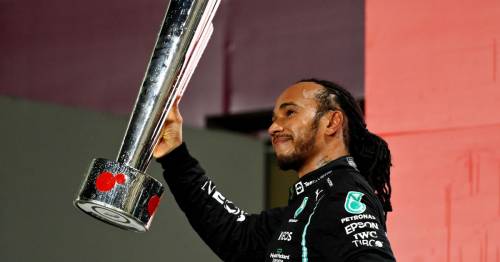 Lewis Hamilton admitted it was ‘lonely out front’ as he dominated at the Qatar Grand Prix but that he was ‘grateful’ for the points.

The Brit won a Formula 1 race for the seventh time in 2021 out in Qatar as he produced a dominant display to lead from start to finish.

His back-to-back wins keeps his title hopes alive with the deficit between him and Max Verstappen now just eight points.

Fernando Alonso also delivered a brilliant drive to finish in third for Alpine, his first podium finish since 2014.

The 40-year-old Spaniard was also voted Driver of the Day for his performance as he held off Red Bull’s Sergio Perez before a late virtual safety car secured his finish.

Mercedes’ Valtteri Bottas suffered a puncture just after half distance and was later forced to retire from the race.

For Hamilton, however, it proved to be one of the easiest wins of the season as he comfortably secured the victory.

“It was pretty straightforward, it was lonely out front,” he told Jenson Button on Sky Sports F1 after the race.

“I enjoy those races where you’re battling through but we just needed the points today.

"I’m just grateful for those points. To be at this point of the year with two back-to-back wins is special. It feels good, I’m really happy with the car and feel fitter than ever.”

Verstappen had been hit with a five-place grid penalty for not respecting double-waved yellows in qualifying before the start of the race, meaning he dropped from second to seventh.

But the current championship leader didn’t allow that penalty to damage his race too much as he quickly fought back to second and took the point for fastest lap.

“I know it’s going to be difficult to the end but that’s quite nice, I enjoy it,” he told Jenson Button following the race.

“This track is enjoyable to drive and the degradation was a challenge, so it’s cool. I feel good, it’s going to be a tight battle to the end.”

One of the biggest cheers, however, was reserved for Alonso who achieved his first podium seven years after his last one.

The Alpine racer said: “Seven years but finally we got it! We have been close before but not enough.

“Honestly I thought I could lead after lap 1 with the soft tyre. We planned one-stop from the beginning, but never knew how bad the wear was. The race was well-executed, the team was great and the reliability of the car was superb.

“I was waiting so long for this, so I’m happy.”

In the Constructors’ Championship Mercedes still have an advantage by 11 points, despite Valtteri Bottas’ retirement.

The race result in full

Previous : Max Verstappen hit with five-place grid penalty ahead of Qatar Grand Prix
Next : Two hostages have been released in Haiti, group says