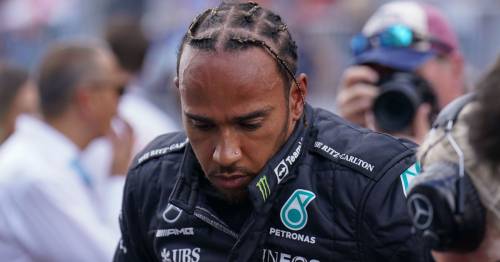 Mercedes superstar Lewis Hamilton admitted he did not understand why the Silver Arrows insisted the seven-time world champion made a strategy decision at the inaugural Miami Grand Prix on Sunday. Hamilton ultimately finished sixth, just one place behind teammate George Russell.

The octuple world champions have struggled with severe porpoising as their cars have been bouncing uncontrollably. The porpoising issues have plagued the early rounds of the 2022 season for Mercedes, and neither Hamilton nor Russell have been able to truly compete with the likes of Ferrari and Red Bull.

However, this issue appeared to have been relatively nullified in Florida, and a different moment drew the ire of Hamilton as Max Verstappen took the win. The 37-year-old’s race engineer Peter Bonnington asked the driver whether he wished to take on new tyres during a late safety car.

While Russell – who started 12th – took advantage of the incident to make the only tyre switch of his race, Hamilton decided to stay out. His teammate was ultimately able to use his fresher tyres to secure a fifth successive top-five finish in 2022.

“In that scenario, I have no clue where everyone is, so when the team say ‘it is your choice’, I don’t have the information to make the decision,” said Hamilton. “That’s what your job is.

“Make the decision for me as you have all the details and I don’t. I rely on the guys for that, but today they gave the decision to me and I didn’t understand it.

“When you are given that responsibility it feels like gambling and I don’t like that. It was just a bit unfortunate.”

After Russell came out on new medium tyres behind Hamilton on old hards following the safety car restart, the two compatriots and teammates went wheel-to-wheel for the first time as Mercedes rivals. The 24-year-old used his extra grip to pass Hamilton in the end, but it wasn’t easy.

Russell actually had to do make the move twice as the first attempt was deemed unfair by the FIA because he made the pass after going off track before making it. Once he let Hamilton back past, Russell re-passed him straight away into Turn 11.

“George was on the best tyre to start with, and in hindsight maybe I could have started on the hard tyre,” Hamilton admitted. “But he did a great job to recover from his starting position.

“He was fair and had fresh tyres so I was a bit of a sitting duck. I am waiting for a change in fortune, but until then I will keep working as hard as I can.”

Do you think Lewis Hamilton and Mercedes can turn it around in 2022? Let us know in the comments section.


Lewis Hamilton battled teammate George Russell on the track, although the young Brit came out on top thanks to his fresher tyres
(

Russell completed a sensational performance to go from 12th to P5 after starting on hards and going long. The safety car helped him immensely, and he now has 23 points more than Hamilton in the Drivers’ Championship.

“Obviously you leave a bit more room when you’re battling with your team-mate than you ordinarily would do,” Russell said. “I was told I had to swap positions back and that was a little bit frustrating as I was catching the guys ahead. Fortunately we all came home in one piece.”