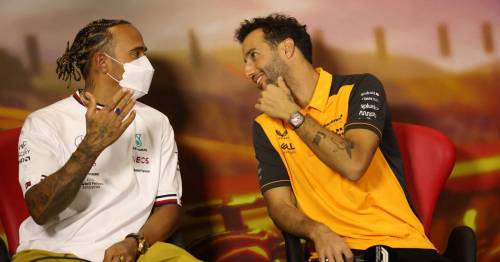 Daniel Ricciardo has dismissed the suggestion that Lewis Hamilton 's back pain after the Azerbaijan Grand Prix might have been for show.

Hamilton took a while to clamber out of his Mercedes following the conclusion of the race in Baku. Once he did, he spent a few moments sat on top of the car holding his back before telling reporters that he had been "praying" for the race to end.

Red Bull chief Christian Horner showed little sympathy for the seven-time world champion, suggesting in the post-race press conference that Mercedes had told him to "b**** as much as they could over the radio and make as big an issue out of it as they possibly could".

He went on to say the Silver Arrows are responsible for finding a solution which alleviates pain for drivers without compromising performance without a rule change from F1 bosses, adding: "If it was a genuine safety concern across the whole grid then it is something that should be looked at but if it is only affecting isolated people or teams, then that is something that the team should potentially deal with."

But former Red Bull racer Ricciardo does not agree with that assessment, and expressed his belief that Hamilton had not been putting on a show in Baku. "There was talk about Lewis after the race. I saw some of his on-boards, I saw pictures of him getting out of the car and stretching his back, and he wasn't exaggerating. It really was uncomfortable," said the McLaren driver.

"The good thing is that it is very visible. If you have the car's audio, you can hear it jumping and bouncing, and from the images, you can see the helmet is moving around, too. It is not normal or comfortable. The position we sit in the car, we don't have much room to move so we are not prepared for the impacts.

Christian Horner took aim at Hamilton after the race in Azerbaijan
(

"If that is up to a rule change, or the way the teams are setting up the cars, I am not 100 per cent sure – but I wouldn't like anyone to go through any unnecessary injury or pain. We have spoken about it throughout the season, but with Baku being such a big one, I am sure it will get discussed in the drivers' briefing on Friday."

After an initial suggestion from Mercedes boss Toto Wolff that Hamilton might not be fit to race at this weekend's Canadian Grand Prix, the Briton took to social media to confirm he would be heading to Montreal. "[Sunday was tough and had some troubles sleeping but have woke up [on Monday] feeling positive," he told his concerned fans.

"Back is a little sore and bruised but nothing serious thankfully. I've had acupuncture and physio with Ang [Cullen] and am on the way to my team to work with them on improving. We have to keep fighting. No time like the present to pull together and we will. I'll be there this weekend, I wouldn't miss it for the world. Wishing everybody an amazing day and week."

Previous : Former F1 star tells Lewis Hamilton to stop ‘acting like a pantomime dame’ with back pain
Next : Winners and losers of UK’s £15billion energy bill payout – from drivers to pensioners