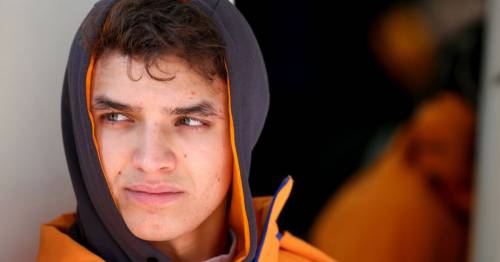 Lando Norris has described some of the comments he has received on social media as ‘very creepy’ as the Formula One star opened up on the pitfalls of fame.

Norris has announced himself as one of F1’s up-and-coming stars in recent years, after earning his first ever driver contract with McLaren in 2019, who he has driven for ever since.

His remarkable rise on the track has also come with a life of fame off it, especially on social media where he has 1.5 million followers on Twitter and 4.4 million on Instagram.

Despite his remarkable following, Norris revealed that there are some pitfalls to his fame having come across a number of ‘very creepy’ encounters on his social media.

Lando Norris has discussed the pitfalls of sporting fame.
(

The 22-year-old told ESPN: “Honestly, it's very creepy what some people do. The time they spend trying to investigate things or people or whatever. I just laugh and find it very funny, but it's very weird. It's just odd."

The McLaren driver also opened up on the effect it has played on those closest to him, revealing his family and friends are dragged into the spotlight ‘through no fault of their own’.

He continued: “I think the one bad thing is just personal life with friends, people who through no fault of their own get put into the spotlight sometimes because of being seen with me or me following them on social media or something.”

Norris then went on to describe some of his following as ‘nasty’: "I think that's been the worst side of it: someone who is just quiet on their own and they're seen with me at dinner or on a post on Instagram.

“There's still a lot of nasty fans, a lot of fans which are just not nice and just use a lot of people and things like that.

"I'd say that's been the worst thing about the popularity, is those kinds of people.

“The people who don't respect your personal life at all and the people you hang out with and so on. That's definitely the worst bit of it."

Finding himself in the position he does now has no doubt made the 22-year-old much thicker skinned, however he draws the line at abuse being directed to those closest to him, and he describes this as ‘the only real thing’ he ‘hates’ about his lifestyle.

“It's disrespectful, I feel, to someone who through no fault of their own, I guess because they're my friend or something, gets abused on social media because someone doesn't like the top they wear and it's because they're friends with me… crap like that.

"That's the only thing I really hate about being in the position I'm in now."

As well as interacting with his fans online, Norris has also come across a number of his followers in person, with many of course hoping to get a picture with their sporting hero.

Whilst this can sometimes happen at inconvenient times, the McLaren driver admitted he finds it hard to say no when approached by his fans.

Lando Norris, 21, has impressed for McLaren this season.
(

"Sometimes if I'm just at dinner with friends… honestly I don't mind when people come and do it,” added Norris.

“Of course, it's maybe not the nicest thing when you're in the middle of dinner and people come and say 'can I get a quick picture please?'

"But I feel like I can't say no! I feel like they'd hate me and they wouldn't be my fan anymore.

"I hate saying no, that's a problem sometimes, maybe I need to start saying no a bit more often. But I struggle to."