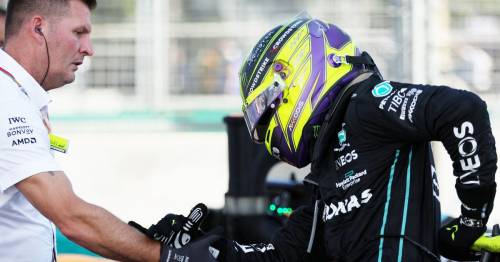 Mercedes superstar Lewis Hamilton has been encouraged "not to act like a pantomime dame" as he struggles to manage a back injury in time for Sunday's Canadian Grand Prix.

Those are the words of advice from ex- Formula 1 driver John Watson, who has suggested more aches and pains are a natural part of a driver's evolution. The comments were made after Hamilton's participation in Montreal was called into question as a result of a back problem he displayed at the Azerbaijan GP.

The 37-year-old—now in his 16th season as an F1 driver— risked the wrath from the stewards when he required help to exit his car at the end of the race in Baku. Former McLaren and Brabham star Watson sympathised the W13 hasn't made for an easy drive this season but felt some of his reaction was over the top.

"Lewis needs to be careful not to act like a pantomime dame," advised Watson when speaking to the Daily Mail. "It is a very difficult car to drive but at 37 the bones are not as forgiving of an uncomfortable ride.

"This is a whole new world to Lewis. He has had seven or so years when Mercedes have been dominant and it’s perhaps like a seven-year itch. George [Russell] looked pretty fresh afterwards and finished third to Lewis’s fourth. Lewis maybe needs to recalibrate and spend less time in the air and more in the gym."

It's likely the last wish of any seven-time world champion to be told they need to spend more time, and not less, in the gym. While it's true fatigue and recovery rate may be more of a concern in the latter stages of Hamilton's career, the future Hall of Famer has assured he'll suit up in Montreal.

Where do you think Lewis Hamilton will finish in Montreal on Sunday? Let us know in the comments section.

"It was tough and I had some trouble sleeping but I’ve woken up feeling positive today," Hamilton clarified ahead of the Canadian GP on Sunday. "My back is a little sore and bruised but nothing serious, thankfully.

"I’ve had acupuncture and physio and I am on the way to my team to work with them on improving. There’s no time like the present to pull together, and we will. I’ll be there this weekend. I wouldn’t miss it for the world."

Watson—who won the British Grand Prix in 1981—may be right in his suggestion there is more Hamilton could be doing to retain race fitness. And with 88 points between him and leader Max Verstappen, it's Hamilton who's behind in his bid to return to the sport's summit.

Previous : Sebastian Vettel admits he is scared to retire from F1 amid concern over ‘security’
Next : Lewis Hamilton gets support as Daniel Ricciardo spurns Christian Horner ‘b****ing’ jibe