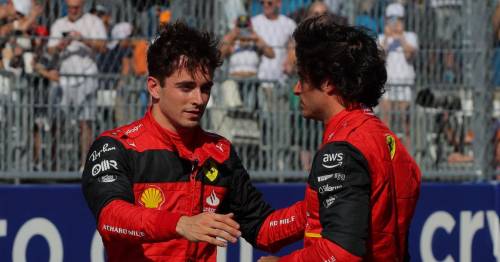 Ferrari have found themselves at the centre of a storm having been accused of breaking F1 rules.

The Scuderia have been the main benefactors of the new regulations in 2022, leading the standings in both the drivers' and constructors' races. Despite having been beaten to the chequered flag by Max Verstappen in Miami on Sunday, Charles Leclerc holds a 19-point lead over the reigning world champion.

He and Carloz Sainz have also built a slender six-point advantage over the Red Bull pairing, although it is still early days with 18 races remaining in 2022. However, the rivals of the Italian team are unhappy after spotting an apparent discrepancy after the Emilia Romagna Grand Prix two weeks ago.

Both drivers took part in a Pirelli tyre test the Monday after the race at Imola, which Leclerc was again second behind Verstappen while Sainz crashed out early on. However, the Spaniard was spotted running with a different floor design to his Monegasque team-mate, who had run in the morning session.

The FIA rules for tyre testing appear to be clearly forbid such practice. They state that no experimental parts should be used and all components must have been used in previous races or tests and comply with the technical regulations.

Ferrari are adamant they have worked in tandem with the FIA, who have cleared them from any wrongdoing. The decision has not gone down well with other teams, who have now called for full transparency from the authority.

Zak Brown is unhappy with Ferrari
(

McLaren CEO Zak Brown has been one high-profile figure to hit out, saying: "I think what's important is that we do have total trust in the FIA to police the sport, whether it's at a test or a race weekend. But then we also need total transparency. It's been suggested, or so I've heard, that maybe it was an older floor."

"Maybe that was the case. But I think what's important is that if that's the case, demonstrate that to the teams: just give us confidence that it's been policed appropriately in total transparency."

Back in 2019, Ferrari were investigated by the FIA over the engine the team used. Brown used that saga an an example as to why more needed to be explained this time around.

"We've had in the past, not long ago, an engine violation a few years back, and then there was a significant fine. We don't know how much and we also don't know exactly what was done," he continued.

"I think in today's day and age, total transparency will help the sport understand what happened, why it happened and what's been done about it."

In two weeks, the F1 season will continue at the Spanish Grand Prix in Barcelona. It's the same venue where Ferrari impressed in pre-season testing, as they look to half the momentum of Red Bull and Verstappen.

Previous : Owner worried after dog stops eating – then finds 16 golf balls in his tummy
Next : Lewis Hamilton hits out at Mercedes and tells team to “do their job” in Miami GP rant