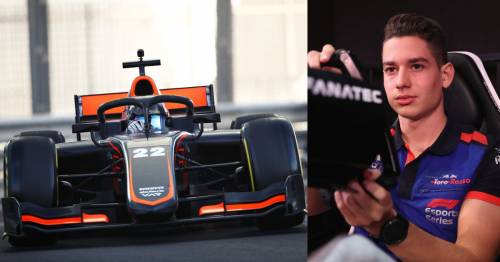 Former F1 Esports driver and sim racer Cem Bolukbasi has made history after securing a drive in next season's FIA Formula 2 Championship.

It has been confirmed today that the 23-year-old will race in F2 next season with the Charouz Racing System team, becoming their first new recruit ahead of the 2022 FIA Formula 2 Championship campaign. Following the announcement, Bolukbasi paid tribute to his F1 Esports Series and sim racing experience, which allowed him to make the step into real-life single-seater racing and now, F2.

“I was in Abu Dhabi in 2017 for F1 Esports as an Esports driver,” he told the official Formula One website.

“To return after four years testing an F2 car was pretty insane for me, realising everything. I watched the F1 finale, testing, and then a day later I was driving the F2 car. I was like a kid living a dream over those five or six days.”

“If I was never in F1 Esports, I would never have had the chance to get into a real car – I would not be where I am now.

“I think it’s also very important to be the first gamer to do this, because it can give people hope.

Cem Bolukbasi of Scuderia Toro Rosso during the F1 Esports Series at GFinity Arena on October 31, 2018 in Fulham, England.

"If people see that one person can do it, they will believe they can do it as well… If I can go from F1 Esports to FIA Formula 2, I think anyone can.”

Bolukbasi, who was competing in virtual races in the F1 Esports Series in 2017, 2018 and 2019, also winning the Formula Renault Esport Series, graduated into real-life single-seater racing in the 2019 GT4 European Championship. The Turkish driver then drove in two full seasons of GT4 racing in 2020 and 2021, winning twice in the Pro-Am category.

On joining Charouz Racing System ahead of the new season, Bolukbasi thanked the team for trusting him and said that he can't wait to get started.

“I worked so hard to get an opportunity like this and first of all, I want to thank Charouz for putting their trust in me, I’ll do my very best to honour it.

“I obviously can’t wait to get in the car for the testing sessions, after my first taste of an old GP2 car later last year. It’s as close as you can get to a Formula 1 car and I’m fully determined to give my 110% to learn how to master it and prove my potential as a driver.

“I also can’t wait to start working with the team, the season ahead is gonna be very long and demanding and establishing the best possible relationship with all the guys is going to be crucial for the final outcome.”

Previous : Boy dies and girl in coma from ‘poisoning’ after vaping together at sleepover – World News
Next : Mercedes dropped Abu Dhabi appeal ‘on promise that Michael Masi would be sacked’