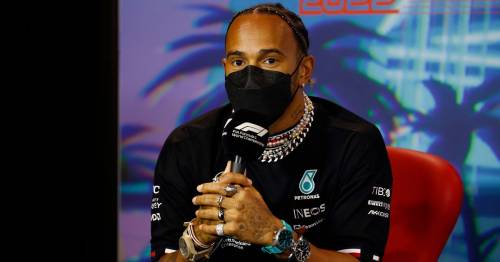 F1 supremo Mohammed ben Sulayem has insisted that Lewis Hamilton has 'no choice' but to remove all his jewellery following the FIA's crackdown.

New FIA race director Niels Wittich has taken a tough stance on wearing jewellery while racing, with organisations rules stating: "The wearing of jewellery in the form of body piercing or metal neck chains is prohibited during the competition and may therefore be checked before the start."

The Mercedes star made his feelings clear about the clampdown and even dramatically hinted that he could miss the Miami Grand Prix because of the situation, as he remained defiant in the face of the FIA's stance on wearing watches, necklaces, earrings and other accessories when behind the wheel.

The seven-time world champion did perform a U-turn on that stance, and agreed to take off any jewellery – other than his nose piercing – for the inaugural Miami GP last weekend. However, the situation is set to rumble on as the F1 travelling party heads to Barcelona next.

According to the Daily Mail , Hamilton reportedly held a discussion with FIA doctor Sean Petherbridge before first practice in Miami, which led to him to bow to pressure from FIA chiefs.

The British F1 star's nose piercing requires surgical removal, so he was given a two-race 'grace period' that allowed him time to get rid of the piercing.

That means by the time the Monaco GP comes around, Hamilton must have the piercing removed otherwise he could face a potential ban. But the Mail are reporting that he is digging his heels in.

And now Ben Sulayem has spoken for the first time on the matter, and insisted Hamilton would be punished if he continues to be at odds with the FIA when F1 gets to Monaco.

When asked what will happen if he defies the FIA's wishes, he replied: "That's up to him. There are fines that apply. It's like if someone speeds on the roads – you can't stop them doing it but they get fined, even if it was accidental.

"You can't let people off because they are your friends. There has to be one rule for all, and that's that." He then added: "I love jewellery. "I absolutely love it. But in the car there can be no choice. People say they (the rules) haven't been implemented before. Don't ask me why not. People can ask the old regime why that is the case."

While he is at odds with the FIA, things aren't going any better on the track, following another mediocre race for Mercedes in Miami last time out.

The seven-time world champion finished sixth in the race behind teammate George Russell, and he is already a massive 68 points behind championship leader Charles Leclerc.