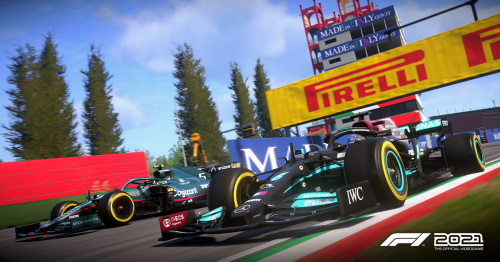 Following the addition of Portimao last month, Imola is now a playable circuit on F1 2021 following the latest update to the game.

Back in April before the game was officially released, Codemasters confirmed that F1 2021 would feature all the teams, drivers and circuits from the 2021 FIA Formula One World Championship, and three brand new circuits in Portimao, Imola, and Jeddah, which would be available to all players as free post-launch content.

The Algarve International Circuit, also known as Portimao, was added to the F1 2021 game last month as free-post launch content, and today fans will finally get the chance to drive on the iconic Imola circuit, with the track being added to the game as free-post launch content today. Codemasters has confirmed that Jeddah will be added to F1 2021 in November ahead of the Formula 1 Saudi Arabian Grand Prix 2021.

"Last month’s response to Portimao was overwhelmingly positive, and we know our players are going to love racing at Imola," said Paul Jeal, F1 Senior Franchise Director at Codemasters.

"We're also thrilled that Red Bull chose F1 2021 to help reveal their bespoke Turkish Grand Prix livery. Our studio prides itself on creating the most authentic experience possible and these special touches reinforcea how closely the game is embedded into the world of Formula 1."

But the latest update doesn't just include Imola as a new circuit, because Patch 1.12 also includes some major gameplay changes, including a visual sports update, including the special white Red Bull livery in the 2021 Turkish GP, an Esports Pit Release option and various other gameplay changes.

F1 2021 patch 1.12 includes a visual sports update including the special Red Bull livery as seen in the 2021 Turkish GP
(

Check out the latest changes to F1 2021 in the detailed patch notes below, which are available on the EA website.

FUT 22 Top 10 players in every position

Xbox and PlayStation players can also try F1 2021 for free with a trial available now to download via the respective digital stores. The trial allows players to sample the opening of Braking Point alongside a Grand Prix at Monza and the opening weekend for My Team.

F1® 2021, the official game of the FIA FORMULA ONE WORLD CHAMPIONSHIP™, boasts several new features, including the thrilling new story mode, 'Braking Point', an expanded Career mode enabling two players to come together and race, and Real-Season Start with the option to jump into the championship at any point that has already occurred, adopting the real-time driver and constructor standings.