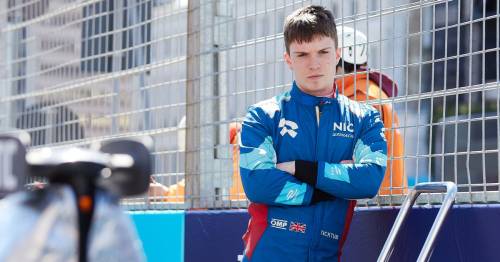 Dan Ticktum knows he will never escape his bad boy reputation – but Formula E has finally left him with a smile on his face.

The young Brit has a history of ill-discipline stemming from his year-long 2015 ban from motorsport for ignoring a safety car to purposefully crash into a karting rival. He was later signed by both Red Bull and Williams' F1 driver academies, only to be axed by both.

But he is now enjoying something of a resurgence in Formula E. Ticktum, 22, signed for back-marking team NIO 333 in the winter but has already helped turn the strugglers into points scorers.

He heads to Berlin for a double header this weekend knowing he has potential in his car – and that means potential for his future career.

He said: "I sealed my fate when I got banned all of them years ago. Since then, I have sort of been a villain of motorsport with every little thing I do. Another driver can say something controversial, but because it's me, it's 10 times worse.

"But I created that reputation for myself unfortunately which hasn't been great but it is what it is. I know how to keep a lid on it but it is part of who I am. In this category, you can be yourself a bit more.

Will Dan Ticktum turn his reputation around in Formula E? Let us know in the comments section.

"When you're on the F1 ladder you feel like you are constantly being watched and every little thing you do is picked up on. Hopefully here I'll be able to make a little more of a character for myself and I think Formula E allows you to.

"When you're off the F1 ladder, you can sit back and realise that this is a very privileged position to be in; you're paid to race around the world. Yes, it's not nice knowing you didn't quite make it to Formula One, but I have to say, being here is a great environment so far.

"Even if I don't get to Formula One and I just progress in this championship, I would be very, very happy, so that's the aim."