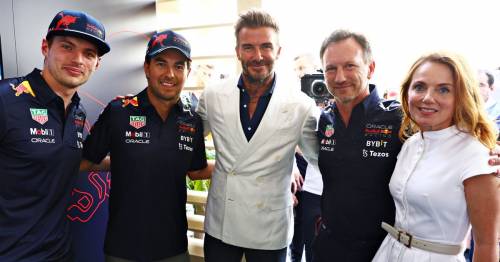 David Beckham was seen posing alongside Red Bull's Max Verstappen and Christian Horner ahead of the glamorous Miami Grand Prix.

The England football legend is one of a host of celebs who have turned up to enjoy the glitzy event in Florida. While the race itself will take centre stage this Sunday the guest list is a show in its own right with the likes of Tom Brady, LeBron James and Michael Jordan all enjoying the weekend.

The inaugural Miami Grand Prix is gunning for Monaco's status as the jewel in the crown of Formula 1 and – while its marina may need work compared to the iconic Monte Carlo race – the celebrities in attendance bring the same level of stardom.

One of those was Beckham who was pictured prior to the race alongside the Red Bull team, with reigning world champion Verstappen and team principal Horner. Fellow Red Bull racer Sergio Perez was also in the photo as well as Horner’s wife Geri, who rose to fame as a member of the Spice Girls, with Beckham famously married to another member of the super group Victoria.

Another famous name in attendance is American DJ and record producer DJ Khaled, who posed for photos outside the McLaren garage before the race gets underway. Serena Williams was also seen enjoying the event with some of the very best in American sport in attendance.

All eyes later will of course be on the race as Charles Leclerc looks to extend his lead at the top of the Driver’s Championship. The Ferrari driver starts on pole position after a brilliant run in qualifying yesterday. His team-mate Carlos Sainz will start second on the grid with Ferrari enjoying a front row lockout.

Geri Horner talks with Serena Williams before the Miami GP
(

However, despite the undoubted glamour, not everyone has been singing the praises of the Miami circuit. The Grand Prix chief Tom Garfinkel has said he anticipates changed to be made after Lewis Hamilton compared it to a B&Q car park.

Seven-time world champion Hamilton criticised the tight left-right chicane at Turns 14 and 15 of the purpose-built temporary layout which runs round the Hard Rock Stadium – home of NFL’s Miami Dolphins – and called for it to be removed. “We are evaluating some of the drivers’ comments to make sure we can improve, and we are open to changing whatever we need to do to make the track better,” said Garfinkel.

“I don’t know if we communicated well enough why the chicane exists. It was a necessary evil to slow the drivers down because we don’t have enough run-off space.

“But from talking to F1 and the FIA, there is an opportunity to change that and make it better. We are also evaluating the surface, and we want to make that right, and make changes if needed. If the drivers cannot go off the racing line, there is not going to be overtaking and that is not good because I want to have as much overtaking as possible.”