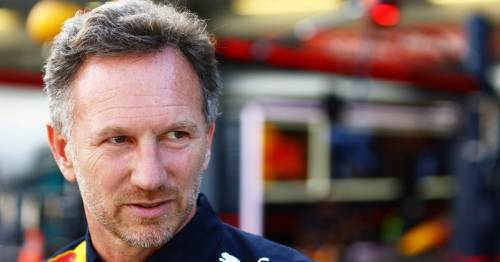 Christian Horner suggested Mercedes have told Lewis Hamilton to "b****" about his back pain at every opportunity in a bid to force the FIA into changing rules in their favour.

As the team suffering the most from the porpoising effect at the Azerbaijan Grand Prix this weekend, Hamilton and team-mate George Russell took something of a beating as they raced around the bumpy street circuit. Both drivers have complained about the discomfort, with Hamilton in particular describing the extent of his pain.

The seven-time world champion looked like he was in agony as he slowly clambered out of his W13 at the end of the race, holding his back as he sat atop the car. He later talked about the severe pain, while Toto Wolff suggested he may not be fit to race in next weekend's Canadian Grand Prix.

But Horner, whose Red Bull team has experienced much less porpoising this year, is suspicious that Mercedes might be making it out to be a bigger issue than it really is. Asked what he would do if it were his team suffering so much, he replied: "Tell them to bitch as much as they could over the radio and make as big an issue out of it as they possibly could."

Asked if he felt this is what Mercedes were doing, he elaborated: "Of course it is. Look, it is uncomfortable but there are remedies to that but it is detrimental to the car performance. What is the easiest thing to do? Complain from a safety point of view but each team has a choice.

Apparently concerned that Mercedes might be dressing it up as a safety issue to force a rule change in their favour, Horner went on to say such an outcome would be "unfair" on the team that have worked and spent money to eradicate the issue in their own cars. "The easiest thing is obviously to raise the car so a team has a choice to do that," he said bluntly.

"You have a choice where you run your car and you should never run a car that is unsafe. But I think that is more for the technical guys because there are certain cars that have some issues and certain cars with very few issues. It would seem unfair to penalise the ones who have done a decent job versus the ones who have perhaps missed the target slightly."

Previous : F1 rule stopped Lewis Hamilton being helped out of Mercedes despite obvious back agony
Next : Lewis Hamilton duty of care means Mercedes must give up performance to avoid serious injury – Daniel Moxon