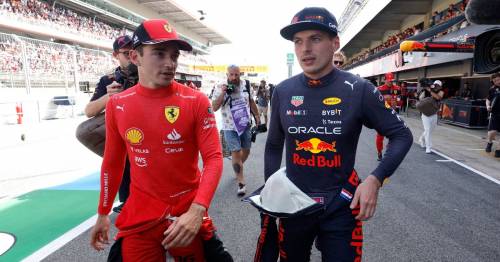 Charles Leclerc has been told he is not yet out of the Formula 1 title race with Max Verstappen still catchable.

The Ferrari ace set the early pace in the championship, winning two of the first three races to top the standings. But a mixture of his own errors and a lack of reliability in his car's engine have been costly in recent weeks, and have seen him slip 34 points behind current leader Max Verstappen.

The story is worse for Ferrari in the constructors' table, after a disastrous Azerbaijan Grand Prix. Both their drivers were forced to stop with mechanical issues, while Red Bull took full advantage by scoring maximum points and opening up a gap of 80 after just eight races.

It already looks like a tall order for the team to overcome their rivals heading into this weekend's Canadian Grand Prix, but one former F1 champion has urged them not to panic just yet. Damon Hill, who won the 1996 drivers' championship, believes there is too much of the season still to go for anyone to draw conclusions from the title race just yet.

"It must be immensely frustrating, but the championship is still wide open," Hill said in his role as a pundit for Sky Sports . "[Baku] was a terrible day for them but I don't think it's a disaster. It's too early to start talking about that. And Red Bull have had problems as well."

But while Red Bull were quick to solve their early-season reliability issues, Ferrari have real concerns about their power unit. Team chief Mattia Binotto himself admitted : "As a team, we pushed a lot to develop the car during the winter, but we proved we are not yet fully reliable."

Mattia Binotto is worried about the reliability of Ferrari engines
(

And adding to Leclerc's personal pile of problems is the looming threat of several grid penalties, with at least one certain. Engine failures mean he is now already on his final permitted turbocharger of the season, with any further components set to be punished by the FIA.

According to Hill's Sky Sports colleague and fellow former racer Johnny Herbert, Ferrari's chances depend on how quickly the team can get to the bottom of the engine problem. "It's how you delve into all those mashed-up bits and try to find what the issue is because it will be a big headache for them in the latter part of the season as that's when you need the power to be strong," he said.

"For the championship, it's a total disaster. It's something you don't probably expect to see in Formula 1, the modern sort of era we've got. And I think that's where we saw the mechanical issue they had in Barcelona, now we've had another that looks like an engine failure. So it will be a really tough time for them to be able to get everything back on track because they have to do it quick."