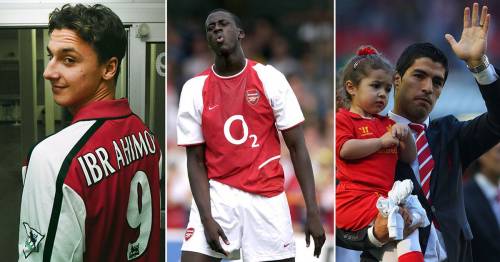 The new Premier League season is still more than a month away, but Arsenal have already started making moves in the transfer market.

Fabio Vieira's move from Porto saw the Portuguese star become the Gunners' second summer addition after Brazilian youngster Marquinhos. There could be more deals to come, too, with Oleksandr Zinchenko among those on the radar of Mikel Arteta and his team.

A new marquee signing in attack would not go amiss either, after Pierre-Emerick Aubameyang's mid-season departure and Alexandre Lacazette's return to Lyon. Eddie Nketiah's new deal is a boost, but fans will feel the Gunners need a lot more in attack.

They won't be counting their chickens, though, with plenty of big deals seeming close in the past, only to collapse. Here, Mirror Football looks at a selection of 'what might have been' moments for the north London club.

If we know one thing about Zlatan Ibrahimovic, it's that he's immensely confident in his own abilities. However, Arsenal may wish they'd known exactly how confident he was back around the turn of the century, when they looked to sign a youthful Zlatan from Malmo.

The striker hit double-figured for his hometown club in a breakthrough 2000 season, bringing Malmo within three points of the Swedish title when he was still in his teens. 2000 was also the year Arsenal showed their interest, but manager Arsene Wenger wanted to get a closer look and the club invited Ibrahimovic for a trial.

"Arsene gave me the famous red and white jersey – the number nine shirt with Ibrahimovic on it and I was so pleased I even posed for a picture wearing it," the striker recalled years later. "It was a fantastic moment for me. Arsenal had a great team then and here was an Arsenal shirt made just for me.

Ibrahimovic could have joined Arsenal as a teenager
(

"So then I waited for him to convince me that I should join Arsenal. But he didn't even try. He never actually made me a serious offer, it was more, 'I want to see how good you are, what kind of player you are. Have a trial'.

"I couldn't believe it. I was like, 'No way, Zlatan doesn't do auditions'. I thought 'You either know me or you don't and if you don't know me you can't really want me'."

Unlike Ibrahimovic, Toure was willing to go on trial with Arsenal in an effort to show his worth. The Ivorian had seen brother Kolo succeed in similar circumstances, going on to become a Premier League champion with the Gunners, and attempted to impress Wenger during a pre-season friendly.

Arsenal had an agreement over a deal, according to Wenger, though there were passport issues in the way. And, regardless, the younger Toure brother's performance in a game against Barnet didn't leave many thinking the Gunners had lost out too much when the midfielder moved to Ukraine instead.

“I have known Yaya Toure since he was 15," Wenger would later admit. We had an agreement for him to come here but we had a problem because he had to wait for a European ­passport.

“He became impatient and went, at the time, to Metalurg Donestsk. The only problem was to fix his position because he could play centre-back, as a second striker or in midfield. In a pre-season game at Barnet he played as a second striker, and was completely average!”

After leaving Donetsk, Toure had stints with Olympiacos, Monaco and Barcelona before finally getting his Premier League chance with Manchester City. It was there that he really hit his stride and showed Arsenal what they missed out on.

After an impressive 2012-13 campaign with Liverpool, Suarez was the subject of a bid for Arsenal as the Gunners sought a long-term successor to Robin van Persie. They bid £40,000,001 – enough to match what they believed to be the Uruguayan's release clause – but the deal failed to materialise.

Instead, Suarez stayed at Anfield and took the Reds within touching distance of the league title. It was only years later that we learned the truth about that clause and the Merseyside club's response.

"[Suarez's] agent claimed that there was a clause: with an offer above £40million, Liverpool would be obliged to let the player go," Arsene Wenger wrote in his book, ‘My Life in Red and White’, as serialised in The Mirror.

“But thanks to an indiscretion within Liverpool, I found out that his clause never existed. To check this was true, we offered £40,000,001.

“This may have seemed ludicrous, I admit. But Liverpool did not want to sell Suarez, they could afford to keep him and there was already an offer from Barca on the horizon.”

Instead of spending big on a striker, Arsenal forked out a club record sum for Mesut Ozil in the summer of 2013. However, with Yaya Sanogo the only striker to arrive that summer, Wenger's men fell short of glory.

Previous : Nine Omicron symptoms to look for in the fully vaccinated – and signs you may have it – World News
Next : Archie Battersbee: Family of boy, 12, to launch appeal after High Court ruled he is dead