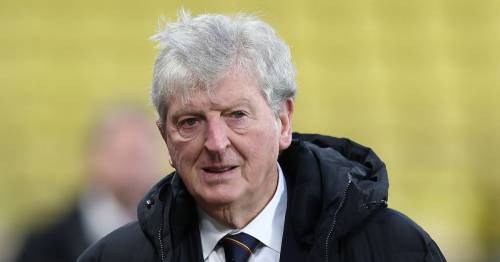 Vince rang his League Two title-winning boss on Tuesday night and challenged him about mounting speculation that Edwards was plotting a defection to Vicarage Road. Edwards, 39, admitted he had been in advanced talks with the relegated Hornets to succeed Roy Hodgson when the former England coach reboots his retirement later this month.

Vegan warrior Vince was deeply unimpressed, telling Sky Sports News: "As soon as he started speaking, I knew that it was for real. [He told me] that he had been in negotiations (with Watford ) and felt it was a great opportunity for him. Overwhelmingly for me the feeling was disappointment, because in football people come and go all of the time – the important thing is the manner of it.

Hodgson is heading back into retirement
(

"I wish him well, but it is poor from Watford, who claim to be starting a new era, and it is poor from Rob as well. He has let us down, but he knows it. We had no contact from Watford, from whom we might expect less, but in any event this kind of behaviour gives football a bad name. We thank Rob for all his work at FGR, forgive him the manner of his departure and wish him well.”

Edwards, who guided Forest Green to promotion in his first managerial post, defects to Hertfordshire just four days after clinching the League Two championship in a 2-2 draw at Mansfield. He is expected to be unveiled by Watford before their final home game against Leicester.

Vince spoke after his club had released a statement on Wednesday confirming that Edwards had left, expressing their disappointment and lamenting that negotiations had been held "behind our backs".

Vince added: "It's the proper way to do things, isn't it, for the club to approach us, so that we're in the picture then they carry on and have their negotiations. If they come to terms, they come to terms. [But] To do it in secret and not only that, Watford advised Rob not to tell us specifically, so that for me doubles down on the deceit."

In 2019, the Hornets won £4.5million compensation from Everton after a protracted tapping-up row with the Toffees over their pursuit of head coach Marco Silva.

Watford confirmed Edwards' arrival, arguing in a club statement: "Rob had a contractual provision allowing him to leave Forest Green Rovers at any time to discuss employment opportunities at other clubs and the Hornets are delighted to confirm our discussions concluded today."

Previous : ‘I thought he was going to kill me’: Victim recounts fighting off would-be kidnapper
Next : ‘We paid £600,000 to live in dream homes but it’s turned into a nightmare’