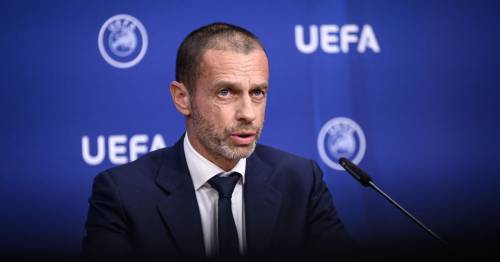 UEFA president Aleksander Ceferin has reiterated that Barcelona, Real Madrid and Juventus could find themselves banned from participating in the Champions League if they continue to drive the foundation of a European Super League, with the governing body and three clubs waiting to hear the outcome of a Spanish court appeal.

In an interview with French newspaper L'Equipe, Ceferin said "of course it is possible" that the La Liga pair and Serie A club would find themselves barred after a Madrid commercial court judge last month lifted an injunction. That decision is subject to an appeal from the clubs, meaning the saga will drag on. UEFA have previously said that the clubs could also be fined up to €100m (£85.4m).

"First, the decision can always be appealed," Ceferin said. "When the process is over, we can act. It is possible to punish any club. Some doubt it. They are wrong. The rules are the same for everyone.

"And if I commented on what people say every day. They also complain that UEFA earns billions, while 93.5% of the income goes to the clubs. How do you explain this if no one is listening? Believe me or not but all clubs are treated the same, whether they are from Slovenia, my country, or whether they are big names in European football.

Asked if the three clubs could be suspended, Ceferin added: "Of course it is possible. But it is the [decision of the] UEFA disciplinary committee, which is independent."

The warning comes after UEFA yesterday confirmed that it had ditched plans to award two Champions League places to clubs based on historical performances following a backlash from clubs and supporters who said it was a step towards a Super League. The governing body is holding its annual congress in Vienna and the decision came after fresh negotiations with the powerful European Clubs Association.

UEFA have announced changes to the Champions League's format from 2024

What are your thoughts on the new Champions League format? Have your say in the comments below.

But the competition is still set to expand from 32 to 36 teams from the 2024/25 campaign with eight group stage matches and plans to play games in January. UEFA will give two of the additional four places to clubs affiliated to the best performing league in European competition the season before, meaning five Premier League sides will be expected to feature more often than not.

Ceferin said in a statement.: "We are convinced that the format chosen strikes the right balance and that it will improve the competitive balance and generate solid revenues that can be distributed to clubs, leagues and into grassroots football across our continent while increasing the appeal and popularity of our club competitions."

Previous : Paedophile took pictures of himself raping baby and secretly snapped naked tot at beach
Next : Fabinho injury latest and how it affects Liverpool’s trophy quest for Jurgen Klopp