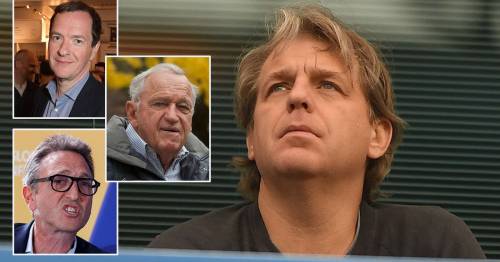 When Chelsea conceded to Conor Coady in the 97th minute at Stamford Bridge on Saturday afternoon, dropping two points that means a top four place is not yet assured, the cameras pointed to Todd Boehly in one of the West Stand's executive boxes.

The 46-year-old is the face of the group aiming to complete its takeover of the club in the next few days, subject to government and Premier League approval. But there are several other key figures involved who have received less attention during the past two months.

Here Mirror Football puts some detail to the names involved and the significance of their presence as the two-times European champions enter a new era.

The leader. The casually dressed LA Dodgers part-owner, with a stake of 20%, will be running point for the new group and has made the right noises so far, using the example of his baseball team's success to assuage some fears around whether they will continue to invest heavily in strengthening the first team and club infrastructure. Boehly was also more than happy to pose for pictures and make small talk with fans outside the ground, an easy PR win considering the departing owner had been absent for several years.

Eldridge Industries, his private holding company founded in 2015, invests in multiple industries including technology, gambling and real estate. He also owns a minor stake in the LA basketball teams Lakers and Sparks.

Switzerland's richest man. The 82-year-old first revealed that Chelsea was up for sale at the beginning of March when telling the newspaper Blick that he had been offered the club more than 24 hours before Roman Abramovich confirmed that was the case. Reports that he was forming a group capable taking over out of spite because he has very different political views to the Russian have been exaggerated but Wyss is a notable backer of left wing causes in America. He had an existing business relationship with Boehly before launching the bid.

Another of Boehly’s business partners, with a larger share in the Dodgers and a similar-sized stake in the Lakers. The 61-year-old is the chief executive of Guggenheim Partners, a financial firm that has more than $310bn (£250bn) in assets under management. Also has interests in wildlife preservation.

A London-based property developer, whose part in the consortium raised eyebrows initially because he is a big fan of Tottenham Hotspur. The chief executive of Cain International was not mentioned in the club's statement confirming a deal had been agreed to acquire the club, indicating his stake will be smaller.

The Tory peer and former advisor to David Cameron will take a non-executive place on the board. He is a lifelong supporter of the club and has long had a football column in The Times. Another important detail for supporters is that he is vehemently against the European Super League.

A renowned music executive who was formerly a journalist for Rolling Stone and NME. Charone, born in Chicago but a season ticket holder at Stamford Bridge for more than 40 years after meeting Keith Richards in Canada, will also sit on the board as a non-executive director and has outlined the same commitment to not joining a Super League in the future.

The former chancellor was pictured with Boehly outside Stamford Bridge late Friday night just before it was confirmed that a deal had been agreed. He has been working in an advisory role during the bidding process but it is unclear what involvement, if any, he will have once the deal is completed.

The money behind the bid. The California firm, with assets under management of an estimated £58bn, will own the largest number of shares but they will entrust Boehly and others to make the decisions. This is its first foray into sport with their existing interests focused on the technology and energy industries. Feliciano, 48, was born in Puerto Rico and previously worked as an investment banker for Goldman Sachs. Eghbali, 46, worked for TPG Capital before establishing Clearlake.