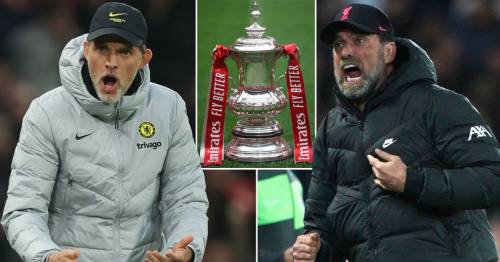 The 150th FA Cup final is promising so much that it has momentarily paused agonising over how much this competition is worth in the modern era. There are so many different narratives, the stakes so high for both Chelsea and Liverpool, that it is tempting to wonder if what happens at Wembley this evening can reignite something deep within the game’s soul or at least relieve those brooding existentially.

Even if it is not the predicted classic encounter in terms of quality, with both teams showing signs of strain and fatigue at the end of arduous campaigns, there will be a memorable storyline. That much is guaranteed.

A Chelsea win would end the Roman Abramovich era with a trophy – sources believe the Todd Boehly group’s takeover is a few days from completion, despite questions remaining over what happens to the £2.5bn – and stop them from making a piece of unwanted history by losing three finals in a row.

A Liverpool win would keep the hopes of an unprecedented quadruple alive, even if few expect Manchester City to slip up in their final two league fixtures. And the potential of a cup treble is not exactly something to be sniffed at.

Then there are the subplots. Another opportunity for Thomas Tuchel to shake off the unfair apprentice versus master tag by getting one over on Jurgen Klopp. It is a rivalry that has been played down but cannot be ignored and the latter’s head to head superiority must serve as motivation for the former.

In terms of selection the biggest call is around Romelu Lukaku. He looked good, perhaps sharper than at any point since rejoining Chelsea last summer, in the past two games. But this is a game of far greater consequence and his overall record against Liverpool is borderline dire – winning three of 19 fixtures against the Reds with five goals, even if the majority of those outings came when in the unfancied team.

To include the Belgian would mean omitting Kai Havertz, who has found a knack for cropping up in the moments that matter most. “We can also play both, although they lacked a bit of the feeling of being a perfect fit together,” Tuchel said on Friday afternoon. “It's very likely that it is one of the two."

Mateo Kovacic could possibly play despite an ankle ligament injury and N’Golo Kante is in contention, while Toni Rudiger’s summer departure to Real Madrid and the expected exit of Andreas Christensen adds another layer of meaning for the West London club.

The composition of Klopp’s starting line-up carries less intrigue, though Fabinho’s absence owing to a hamstring injury is a significant blow that ramps up the pressure on Jordan Henderson to offer protection to the back four. The issue is simple: in Fabinho’s absence the Reds look far less assured as a collective.

It would be a shock if either side were to win easily and February's Carabao Cup final, requiring 22 attempts in a penalty shootout for separation, proved that scoreless draws can be memorably entertaining. Their league meetings also ended in ties.

“It will be down to margins,” Tuchel reckoned. “It will be down to details within the match. We are facing one of the very best coaches and teams in the world right now. It is obvious and proven over the last years and recent weeks.

On the flip side deciphering Chelsea’s approach may be an issue for Klopp. “They have an idea for all areas of the game,” he said yesterday. “They are organised defensively. We have no idea how Thomas will line up, there are so many options. They have a similar system to others but on a different level."

While Chelsea are seeking to avoid the ignominy of a fourth final defeat in six years, Liverpool are remarkably in this position for the first time in a decade when they were defeated by the West London club.

A German manager has never won the FA Cup and it was interesting to hear both speak of the need for good fortune if they are to emerge victorious at tea time.

“We know in football without luck you have no chance,” Klopp said. "There is a special momentum you have to catch and for sure you need a piece of luck to go away with a trophy,” Tuchel echoed.

To hear two of the game’s most meticulous planners boil the outcome down to potential fluke, the help of a deflection or an error from an opponent, sums up the folly of it all.

The stage is set, the storylines are drafted. For the 85,000 who descend on north west London, and the millions watching on from home, this could be one for the ages.