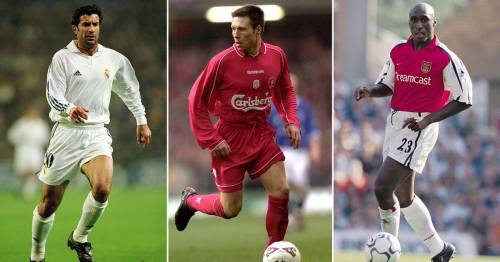 More than two decades have passed since Nick Barmby left Everton for Liverpool, but plenty of the wounds are yet to heal.

The former England international is one of a select few to trade the blue half of Merseyside for the Red. It's not a move which happens a lot, and the reaction of Everton's chairman Bill Kenwright – even years after the fact – gives a clue as to why that's the case.

Barmby's move, back in June 2000, wasn't the first hugely controversial move and won't be the last. Here, Mirror Football looks at 10 deals which caused quite the stir, beginning with the deal which left Kenwright furious just months after the turn of the century.

The 1999-2000 season was Barmby's fourth in an Everton shirt, and also his most productive. He ended the campaign with a career-high 10 goals, nine of them in the league, though it wasn't enough to propel Walter Smith's side to a top 10 finish.

Then came the interest from Liverpool, and a meeting which – as former Reds captain Jamie Carragher told The Athletic in 2020 – "was very cloak-and-dagger". Kenwright, who had completed his takeover just months earlier, was far from impressed.

“It was hearing he had used the six of the worst words in the English language as far as Everton fans are concerned. He had said: ‘I want to play for Liverpool’," Kenwright said. "To say I was shocked and surprised doesn’t begin to describe how I felt about it.”

As far as football rivalries outside England go, few have the potential to get as heated as the battle for supremacy between Real Madrid and Barcelona. Back in 2000, the same summer which saw Barmby moved across Merseyside, Los Blancos were in the midst of their Galactico era.

Figo, like Barmby, had scored nine league goals the previous season. Unlike Barmby, he had also starred at Euro 2000 for Portugal, and made the hugely controversial switch between La Liga's big-hitters after Real Madrid met his release clause.

"That night when Figo first went back was incredible, I've never heard anything like it," Real Madrid defender Ivan Campo said, as relaid in Sid Lowe's book 'Fear and Loathing in La Liga'.

There were even reports of a pig's head being thrown in the direction of the Portuguese star as he prepared to take a corner. "I didn't see it. If I had I would have eaten a bit: an aperitivo," he later joked.

Just 12 months after the summer of Barmby and Figo – okay, mostly Figo – the Premier League prepared for one of the biggest free agent decisions in its nine-year history. Sol Campbell was out of contract at Tottenham Hotspur, the club at which he began his career, and would be on the move.

There was plenty of interest in Campbell, an England international whose next move was set to take him to a higher level than the mid-table finishes posted by Spurs in the previous campaign. However, by moving to fierce rivals Arsenal, the centre-back opened himself up to plenty of criticism – some over-the top, some based solely in the move itself, and plenty of it persisting to this day.

Arsenal picked up Campbell for free after he left Tottenham
(

"Are you going to keep worrying about me when I’m 80 years old?" Campbell would later ask in a talkSPORT documentary. "I was 25 and now I’m 46. You’ve probably done things when you’re 25 or 15 or whatever. It doesn’t even make any sense now, move on."

Back in 2002, when still a Leeds United player, Alan Smith said he would never join Manchester United. It was easy to believe he was being sincere, too, with the Whites having reached the Champions League semi-finals the previous year.

By 2004, though, things had changed. Leeds were on their way down to the second tier, with relegation following a series of financial woes, and Smith was one of the remaining saleable assets. What's more, the Red Devils were prepared to pay the asking price.

"We had some conversations about it but Alan had done his best for Leeds,” Smith's representative Alex Black would later tell The Athletic. “When he left, we were honestly just as concerned about how the Man United fans would react to them signing him." However, after the academy graduate's earlier assertions about an Old Trafford move, plenty of Leeds fans were far from happy when the deal went through.

Staying with United, Van Persie's move to Old Trafford came after one of the best seasons of his career. The Dutch international had scored 37 times for Arsenal in 2011-12, but the honours he won the following year under Sir Alex Ferguson might have felt sweeter.

"I always listen to the little boy inside of me in these situations – when you have to make the harder decisions in life. What does he want?" the former Feyenoord man explained. "That boy was screaming for Man United."

It took some Arsenal fans a long time to forgive their former player, though the collapse of a potential return was nothing to do with that particular bad blood. "He called me because he wanted to come back, but it was impossible," Wenger said, reflecting on a potential 2015 switch. "He was at the end of his career and we were investing in young players."

Fiorentina may have had a right to feel a real attachment to Roberto Baggio. They'd helped the forward through his rehab from a serious knee injury, before eventually helping him developed into one of the most dangerous forwards in the world.

The Italian international had top-scored for the Viola in each of his last two seasons, earning a breakout tournament appearance at the 1990 World Cup. However, when Juventus came calling with a world record bid, he felt he had no choice.

When the move to Turin was confirmed, riots broke out on the streets of Florence as fans came to terms with the loss of a superstar. He certainly showed his quality in front of goal after the switch, scoring 115 times in 200 games, but was only able to secure one Scudetto before leaving Juve in 1995.

Gotze is by no means the only player to move between Borussia Dortmund and Bayern Munich, but his switch was perhaps the most controversial. When one of the other such deals saw Robert Lewandowski move to Bavaria, that's no mean feat.

Gotze starred for Dortmund before leaving for Bayern in 2013
(

A product of the BVB academy, Gotze had starred as Jurgen Klopp's team beat Bayern to two Bundesliga titles and helped his team make a run to the 2013 Champions League final. Bayern were their opponents in the European showpiece, and the decision to meet his release clause just a month before the final was not received well by Dortmund's manager.

"It's going to take a while, this news is not good for us," Klopp said at the time. "The timing of it is not ideal. Anybody can make their own minds up as to why it's come out now, but it is out."

Cole's move from Arsenal to Chelsea wasn't just controversial at the time. Indeed, we had months of controversy to deal with before the move was made official.

We had the accusations of greed; the alleged illegal approach; the money with the England defender's face on it. We had the assertion from Cole himself that he nearly crashed his car when he learned the amount Arsenal were offering to renew his deal in north London.

When the move went through in 2006, it was for the relative pittance of £5m plus William Gallas. More than a year had passed since the saga began, and plenty of Arsenal supporters still haven't forgotten one of the earliest examples of Chelsea's power to sway a player during the Roman Abramovich era.

Not all of the controversial deals on this list were instantly controversial. Indeed, It took several months after Fryers' 2012 United exit for manager Ferguson to show his frustration.

Ferguson was reluctant to let the academy talent join a fellow Premier League side for less than he was worth, and Tottenham failed to reach a compensation agreement for a player who could have had a compensation package decided by tribunal. Instead, he joined Standard Liege for free – with no compensation due on overseas transfers – before joining Spurs in a cut-price move just months later.

"I'm disappointed in Tottenham," the Champions League winning coach said. "I think it's a blatant manipulation of the situation. I think the league should look into it and I think they should stop his registration until they examine it."

As with Fryers' Johnston's deal wasn't controversial due to him joining one rival directly from another. However, it will surprise few people to hear about the fallout from a former Celtic star moving to Rangers.

Johnston spent some time away in the interim, playing for Nantes for two full seasons. Worse still, he had looked set to rejoin the Bhoys before an about-turn which made him Rangers' first major Roman Catholic signing in their history.

The move was a divisive one, with fans of both clubs unsure how to respond to the Scotland international. Plenty of Celtic supporters made their minds up early, though, with Johnston labelled 'Judas', while some Rangers fans' sentiments changed after he scored a winning goal against his former club.

Tevez's move across Manchester was about more than just inter-club rivalries. It also spoke to a potential changing of the guard, with newly-monied City suddenly able to compete with title-holders United.

The deal was cemented with a 'Welcome to Manchester' poster in the city centre after the Argentine – a Champions League winner with the Red Devils – joined their neighbours in 2009. "It's City isn't it? They are a small club with a small mentality," Sir Alex Ferguson said of the move.

"All they can talk about is Manchester United; they can't get away from it. That arrogance will be rewarded. It is a go at us, that's the one thing it is. They think taking Carlos Tevez away from Manchester United is a triumph. It is poor stuff."