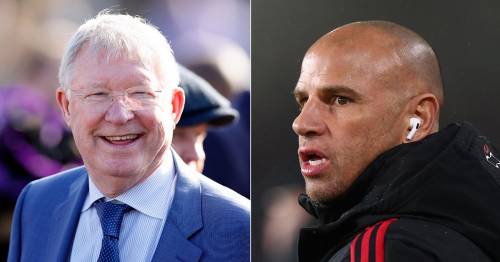 Armas was hired by Ralf Rangnick in December as his assistant for his interim spell in charge of the Red Devils for the second half of the season following the sacking of Ole Gunnar Solskjaer. Shortly after Armas’ arrival at Old Trafford, he met former United boss Ferguson following the conclusion of their 1-1 draw with Swiss side Young Boys in the Champions League.

According to The Athletic, Armas told Ferguson about his playing and coaching career in North America prior to moving to Manchester, with Armas making over 250 Major League Soccer appearances for LA Galaxy and Chicago Fire, as well as playing 66 times for the United States of America.

As a coach, Armas managed Toronto, New York Red Bulls and worked in the management teams with the Red Bulls, Adelphi Panthers and former side Chicago. After Armas relayed his CV to Ferguson, the legendary United boss brutally replied: "You’ll need more than that here, son."

It is unclear whether or not Armas will be at Old Trafford beyond this season following the managerial change at the club. Rangnick managed for the final time in his caretaker role on Sunday, with former Ajax boss Erik ten Hag replacing him for next season.

Where will Manchester United finish next season with Erik ten Hag in charge? Have your say in the comments section.

With Ten Hag’s unveiling imminent, it is set to lead to major changes both in the playing squad and in the coaching set-up. However, Rangnick will be staying at United for the next two years in an advisory role to work alongside Ten Hag, despite him also agreeing to become Austria’s national team manager.

United lost their final game of the Premier League season 1-0 away at Crystal Palace on Sunday. However, results elsewhere meant that the Red Devils still did enough to secure a place in next season’s Europa League alongside Arsenal.

The squad that will be at Old Trafford next summer remains to be seen. Striker Edinson Cavani will be leaving on a free transfer following the end of his contract, with Paul Pogba and Jesse Lingard also set to follow suit.

One of United’s biggest weakpoints has been in central midfield and with Lingard and Pogba both likely to depart, at least one new signing in the middle of the pitch is likely. Marseille’s Boubacar Kamara has been linked, although reports suggest Premier League rivals Aston Villa are set to sign him on a free transfer.

Wolverhampton Wanderers’ Ruben Neves has also been linked with interest from Ten Hag’s side, as well as Arsenal. They could be boosted in that deal by Neves’ latest comments, with the Portuguese midfielder admitting that he may depart Molineux this summer.