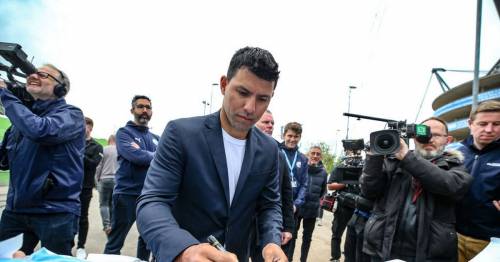 Former Man City striker Sergio Aguero has plenty on his plate after being forced to quit football earlier this season.

The Argentine forward had only made five appearances in all competitions for Barcelona before club doctors detected heart arrhythmia. He was out of action for three months before then being made to make a tearful exit from the game.

Bringing to a close a hugely successful 18-year playing career, Aguero has gone down as one of the icons of both Premier League and European football. A five-time Premier League winner, the now 33-year-old was pivotal in Manchester City scooping the first of those by scoring a dramatic 93rd minute winner against Queens Park Rangers – a moment that has been forever immortalised by both Martin Tyler’s iconic commentary and most recently a statue outside of the Etihad Stadium.

Placed alongside fellow club icons David Silva and Vincent Kompany, it signals his status in club folklore. Aguero himself has broken his silence on the statue with an emotional message.

He said: “Truthfully, it is a very beautiful thing for me. In those 10 years I was able to win a lot of trophies and was able to help the club become one of the most important in the world.

“I am very grateful to the club for making this statue in recognition of my football career in Manchester. It is something very special. I remember I was very young, to see myself 10 years ago is very moving.”

Will Manchester City win the Premier League title this season? Have your say in the comments below.

Whilst the Argentine is forever going to have a place outside of the Etihad Stadium, it appears that his relationship with the club is not yet over. He is set to attend a reunion meeting of the 2012 title-winning squad after the unveiling of his statue and has confirmed that he will also attend a number of other functions, whilst also signalling his desire to assist the Argentine national team at the upcoming World Cup in Qatar.

"With Manchester City we are looking to go to three or four annual events. I'm looking for something similar with the Argentine national team.”

He continued: "My intention is to spend time with the players. I'll be there with the team, I get along very well with them. I want to be close to them and try to have fun and loosen up.

Sergio Aguero is back at the Etihad Stadium for the unveiling of his new statue. (Photo by Matt McNulty – Manchester City/Manchester City FC via Getty Images)

"I want to find a place from where I can help the national team. It's still very recent my retirement and I have offers from several sides, but I want to enjoy myself now and have more time to relax and do things that I couldn't do when I was a soccer player."

He has yet to completely close the door on one day returning to the pitch however, telling Argentine outlet TYC Sports he had the chance to go and play in MLS: "Yesterday, it crossed my mind that I could play again. Inter Miami called me but I refused. In two years? Let's see," he said back in March.

Whilst he is keen to get back to the pitch – whether that be in a coaching capacity or otherwise – Aguero still keeps abreast of the travails of his former side. The 101-time Argentina international has regularly been spotted watching Manchester City games having taken a particular interest in their recent run to the Champions League semi-finals.

Alongside his further footballing ambitions, Aguero has of course forged a successful career in the virtual sphere as well. During the peak of the Covid-19 pandemic, the former striker emerged as a promising gaming star on streaming platform Twitch.

One of the fastest growing channels of 2020, the Argentine can regularly be seen playing games such as Fortnight, FIFA and Grand Theft Auto, whilst he has managed to get a number of his former teammates such as Lionel Messi and Carlos Tevez to feature.

Whether his footballing exploits will now be consigned to the virtual pitch rather than an actual one remains to be seen, but regardless, he is likely to be satisfied with a statue outside of the Etihad Stadium marking his immense contributions to Manchester City as he continues to be busy following retirement.