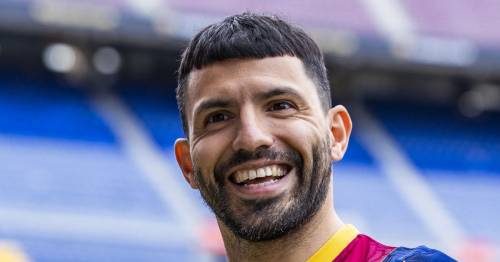 The Argentine, 33, is yet to play for his new employers after suffering a calf-injury in pre-season – but is expected to debut shortly.

When asked by Spanish outlet El Pais if he regrets joining Barcelona, Aguero said: "No. Let's be honest. What player does not want to be at Barca?

"I would tell you that the majority of footballers would like to wear this shirt, no matter how good or bad Barca is.

"I arrived with the expectation of playing with Leo [Messi] and that a good team would be put together, which was what the club tried to do.

"When they called me, I thought, 'I don't care what they pay me. I'm feeling good and I'm going to help the team as much as I can.'"

Aguero agreed a two-year deal with Barcelona in May – expecting to play with close friend Lionel Messi – after a decade in the Premier League with Man City.

But the Catalan giants, who are reportedly more than £1billion in debt, were forced to release their legendary No10 in the summer and he's since joined Paris Saint-Germain.

Discussing Messi's exit, Aguero added: "It was a moment of shock. He was very bad. When I found out I couldn't believe it.

"That Saturday I went to see him at his house. And, because of my personality, since I couldn't see him well, I tried to make him forget what had happened.

"I saw that he was half off and was trying to distract him. I was telling him about my Esports team and the things we were doing."

Barcelona have only recently registered Aguero as a player due to their financial woes but he is finally set to make his comeback after featuring for 30 minutes in a friendly.

The striker, two days after returning to training, scored in a 2-2 draw with third tier outfit UE Cornella on Wednesday morning.

Discussing his role in the team this season, Aguero said: "You can only consider yourself a starter when you do things well and help the team.

"And that's what I think about. In helping the team with a goal every time I have to play."

Aguero also insisted his relationship with Pep Guardiola is fine, despite the player's brother launching a scathing attack on the Man City boss in May.

Sergio Aguero insists his relationship with Pep Guardiola is fine
(

The Barcelona forward claimed: "I never had problems with Guardiola. I never argued with him.

"We did have to clarify things. When he arrived, as we did not know each other, we had a bit of a trial run. The last three years have been fantastic. Nothing to say.

"He is a coach who always wants the maximum. If he has a party idea in his head, he does it.

"He does not care if he has to leave out the team that had scored three goals in the last games. The name of the player does not matter. Unless it's Messi.

"I always accepted when I had to play and when not. Gabriel Jesús, as soon as he landed in Manchester, began to play as a starter. I said nothing."