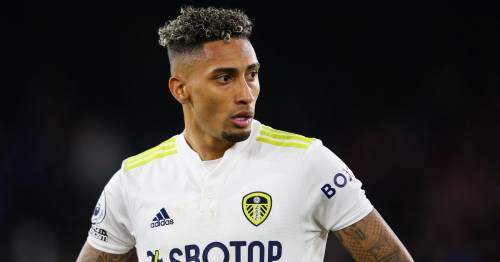 Raphinha is much in demand this summer and Arsenal and Tottenham have joined Barcelona in the race to sign the Leeds star.

But the Brazil winger is in no rush to join either of the north London clubs just yet because he is holding out for a move to Barcelona. Raphinha has set his heart on a switch to the Nou Camp and his agent Deco has even agreed personal terms with the Spanish giants.

However the transfer ran into problems when Leeds survived on the final day, which meant his escape clause in the event of relegation did not apply. Barcelona were banking on Leeds being relegated to enable them to pick Raphinha up on the cheap and they have a restricted transfer budget because of the financial problems at the club.

Leeds want around £60million for Raphinha and this is proving beyond what Barca can pay. This has opened the door for the South American’s other suitors and both Arsenal and Tottenham have the cash to enter into serious negotiations with Leeds.

Spurs can even offer Raphinha the Champions League football he wants if he leaves Leeds. But he is in no hurry to join either side because his first choice in an ideal world remains Barcelona.

Raphinha, 25, is prepared to wait for the right next club and he is attracting much interest because he scored 17 Premier League goals and made 12 assists in his last two seasons with Leeds. He knows his appeal could rise further if he has a good World Cup with Brazil this winter.

In the meantime, contract talks with Leeds remain on the backburner because of the ongoing uncertainty over his future. Leeds director of football Victor Orta initiated them with Deco back in December in what feels like a lifetime ago for the Whites and their fans.

That was when Marcelo Bielsa was boss and before Leeds went close to being relegated and Raphinha was open to the idea of agreeing improved terms and an escape clause in the Premier League. Now the impetus to reach a deal has faded and he is content to see how the next few weeks and months play out.

Leeds are also braced for an approach from Manchester City for Kalvin Phillips and, unlike Barca, there is no doubt they have the cash to prise the England midfielder away. Again, Leeds will demand full market value of at least £60million for Phillips.

Kalvin Phillips faces a huge decision over his future this summer
(

Leeds know it would be very hard for Phillips to turn down such a great career move, despite his love for his hometown club. Bielsa played a key role in Phillips’ development and the former Leeds boss is set to return to Athletic Bilbao if his ally Inaki Arechabaleta wins the presidential election at the Basque club.

Bielsa led Athletic to the finals of the Europa League and Spanish Copa del Rey in 2012 during his two successful years at the club and is keen to return. The presidential elections are on Friday and Arechabaleta claims his first act if he wins will be to bring Bielsa back.

He said: “(Bielsa) is the most respected coach in the world. He is also a coach for the future, although in the past he gave us the best season of this century. “(Bielsa) has evolved since then and his ambition, quality and abilities are going to take us to the Athletic that we must become.”

Previous : Pals traumatised as man on airbed looks them in face before disappearing into lake
Next : Jake Paul’s sparring sessions are “life and death” ahead of potential Tommy Fury fight