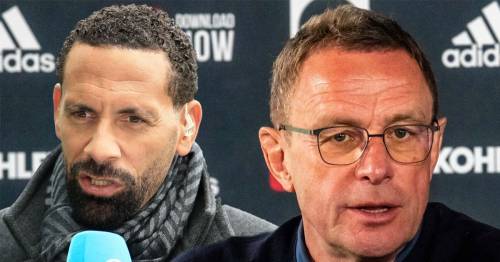 Ralf Rangnick might still prove a success at Manchester United if he helps the club transition to a new era under Erik ten Hag, but few will have fond memories of his spell as interim manager.

The former RB Leipzig boss was unable to turn things around after United's difficult start under Ole Gunnar Solskjaer, and it's now confirmed that the Red Devils will finish with their lowest ever Premier League points total. However, it wasn't just the performances which riled some onlookers.

Former United centre-back Rio Ferdinand has taken particular issue with Rangnick's outspoken nature, even calling for the club to ban him from giving interviews. And "airing dirty laundry," as the ex-player has termed it, is harder to do when results are poor.

"I’ve said this for a couple of weeks now, he’s saying a lot of stuff to almost distance himself from responsibility," Ferdinand said on his Vibe with FIVE YouTube show. "But he has to accept some responsibility that the team has got worse since he’s been in there."

The comments come off the back of Rangnick claiming the United board blocked a number of potential January moves. The German was keen on adding a striker to the club's ranks during the window, with Liverpool's Luis Diaz and Manchester City recruit Julian Alvarez among those considered.

"Maybe they didn’t want to do any winter business. Maybe we should have at least discussed it internally because it might be necessary and important," he said.

"It would have been short notice anyway but still, 48 hours is 48 hours. It might have been at least worth a try. But we didn’t and it wasn't done.”

That was far from the only example of Rangnick upsetting people with his comments, though. Here, Mirror Football looks at some other examples from his short-lived spell in the dugout.

How will you remember Rangnick's time in charge? Have your say in the comments section

Cristiano Ronaldo decision in the derby

Rangnick, like his predecessor Solskjaer, suffered a derby defeat against Manchester City during his tenure. In this case, it was a 4-1 defeat against the reigning champions, but it wasn't just the result which caused a stir.

The manager left Cristiano Ronaldo out of his starting XI for the game, saying "Cristiano had some problems with his hip flexor on Friday and since then, he didn't train". However, it was later reported that Ronaldo was none too happy with the call.

The Sun reported that Ronaldo was furious at his omission, but Rangnick doubled down after the situation was questioned by former United captain Roy Keane. "I have to believe our medical department," Rangnick said.

United's Champions League run ended early with a last-16 defeat against Atletico Madrid, but before that was a chance for Rangnick to give fringe players a chance against Young Boys. Even then, though, it wasn't all plain sailing.

A mistake from Donny van de Beek allowed the Swiss side to score, and Rangnick didn't mince his words after the game. "What was really a little bit annoying was the way that we also gave the goal away, because we played too many balls into the first line of their pressing area," he said.

"We could have cleared the ball easily and whenever we played the ball into the second or third line, we were always dangerous. I told them that before the game but they still played in that situation, the ball a five-metre pass and [Young Boys] were just waiting for that ball. It was more or less a pressing invitation that we sent."

After that 90-minute run-out, Van de Beek only played another 20 minutes of football for United, spread across three substitute appearances. He has spent the second half of the season away from Old Trafford, having decided Everton would offer more opportunities, and it remains to be seen if he'll have a future at his parent club when returning from loan.

Before the start of the season, United were being touted as Premier League title contenders. By the time Solskjaer was sacked that was no longer realistic, but Rangnick still risked irking some players and fans as early as February.

"Right now, this is exactly what Manchester United needs and wants: to finish fourth in the league," he said ahead of the club's February clash with Brighton. "In the league, it's number four, that's our ambition, what we have to achieve and what we're aiming at."

At the time, United were seven points behind third-placed Chelsea. However, had they picked up 27 points from their next 13 games – the tally amassed by European rivals Arsenal – they'd now be level with the Blues.

His comments came shortly after Ronaldo had set a target of third at a minimum. "Manchester United should win the league or be second or third," the number seven told Sky Sports.

"I don’t see any other position for Manchester United. In my heart, I don’t accept that our mentality be less than being in the top three in the Premier League, in my opinion."

It wasn't just players and pundits who were left fuming at Rangnick's comments. Indeed, the club's higher-ups were reportedly left unsatisfied by comments which might be considered too honest.

United were beaten twice by Liverpool this season, losing 5-0 at Old Trafford under Solskjaer and 4-0 at Anfield with Rangnick in the dugout. And it was the interim boss' words after the latter which didn't go down too well.

"It is embarrassing, it is disappointing, maybe even humiliating," he said. "We have to accept they are six years ahead of us now.

"When Jurgen Klopp came they changed at the club and lifted not just the team but the club and city to a new level. That is what needs to happen with us in the next transfer windows."

While it may be true that Rangnick could only do so much in six months, the comments weren't thought to be the most popular. The challenge now is how United react to close that gap to their rivals, even if the decision-makers don't agree with the German on the size of the gap.