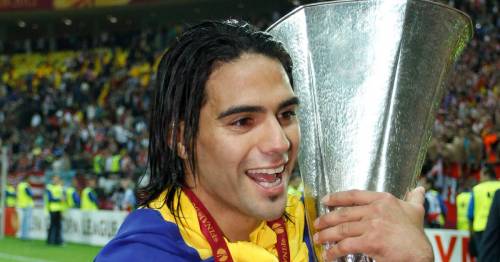 It's not always the case that the two best teams in a competition meet in the final, but there was certainly a case for this when Radamel Falcao inspired Atletico Madrid to victory over Athletic Bilbao in the 2011-12 Europa League.

Atleti had a very good argument, having won every single one of their knockout legs. Their opponents, meanwhile, had topped their group under Marcelo Bielsa before securing stunning home and away victories over Manchester United on their way to the final.

Diego Simeone's team had a squad which, while not yet capable of challenging for domestic honours, had more than enough to conquer Europe's secondary competition. They had a promising young goalkeeper by the name of Thibaut Courtois, future La Liga winners Juanfran and Diego Godin in defence, and, in Falcao, one of the best strikers on the continent at that moment in time.

To describe Falcao as unplayable during his time in the Spanish capital might actually be an understatement. He'd already torn up the continent at Porto, leading them to glory in the previous season's Europa League with a 17-goal haul which no one has come close to matching since, and he picked up where he left off after moving in the summer of 2011.

The Colombian already had 23 league goals and 10 in Europe before the final. Seven of those 10 had been in the knockout stages – two against each of Lazio, Hannover and Valencia, and one against Besiktas – but he wasn't going to rest for the all-La Liga final in Bucharest.

It didn't even take Falcao 10 minutes to open the scoring, and his first goal that evening showed that no defensive preparation was enough to cope with him. If you pushed up, he'd be able to get in behind, while if you got tight he would turn you with ease – you'd think standing off might solve the problem, but you'd be wrong.

Fernando Amorebieta was the unfortunate soul tasked with keeping the striker at bay – and he never stood a chance. The Venezuelan kept his distance, forcing Falcao to chance it with his left foot from outside the box, but when you're in that kind of form, there's no such thing as an impossible chance and you can barely even treat an opportunity as a difficult one.

Just how good was Falcao? Share your memories in the comments section

Things went from bad to worse for Amorebieta later in the first half. The Athletic defender was caught in possession on the edge of his own box, but when the ball reached Falcao in the middle, he still had work to do.

Another striker might have panicked, snatching at a shot or going for power and hoping for the best. However, Falcao approached the chance as if he had all the time in the world.

After feinting to shoot, he left Jon Auternetxe flat on the ground with a deceptive drag-back before giving goalkeeper Gorka Iraizoz no chance. After scoring the only goal of the 2011 final, he was the match-winner once more, with only the base of the post denying him a hat-trick. A late third from midfielder Diego only added extra gloss, and that was that.

Those two goals in the final took Falcao's Europa League tally for the season up to 12. It was the second successive year in which he'd top-scored in the competition, and he followed it up with a sensational hat-trick to down Champions League winners Chelsea in the 2012 Super Cup.

In his two seasons in Madrid, he scored 70 goals, which is impressive even before you remember this was a Simeone team. Simply put, no one scores that many goals for the Argentine's side across two seasons, and few will even manage it over three.

To put Falcao's achievements into context, only two players have scored more than 30 goals in a single season for Atleti since he left. The top scorers from the last four campaigns, including the current one, only have 70 goals between them.

Falcao's next move was hit by injury
(

After two huge seasons like that, Falcao was always going to be in high demand. However, he can't really be blamed for the way things went wrong after opting to join Monaco.

The Ligue 1 club were spending big in 2013, attempting to import that successful 2011 Porto squad by reuniting Falcao with his former teammates Joao Moutinho and James Rodriguez for a combined €130million. Falcao's fee constituted nearly half of that total, and things started strongly with seven goals in his first seven games.

Injuries held him back, though. First, a setback against Nantes which kept him out for a month, then a serious knee injury just three games into his return which would rule him out for the rest of the season and end his 2014 World Cup dream.

Two unsuccessful Premier League loans followed, first at Manchester United and then at Chelsea, but there's an argument he didn't really recover from that injury for more than two years. Gone was the exciting and dynamic striker, a man described by United boss Louis van Gaal as "one of the most prolific scorers in the game", and in his place stood a timid frontman who looked out of place at both English sides.

Now plying his trade with Rayo Vallecano, Falcao's last few seasons have been a renaissance of sorts, with the veteran adding nearly 100 club goals after his struggles in England saw him written off by some. However, if you saw him for Atleti, you'd know even the best version of Falcao at Monaco was nowhere near that level. But, then again, few over the last decade can claim they were even close.

Previous : Queen pulls out of State Opening of Parliament tomorrow after talks with doctors
Next : Enormous 1,000lbs shark which is 12ft in length spotted swimming off shores