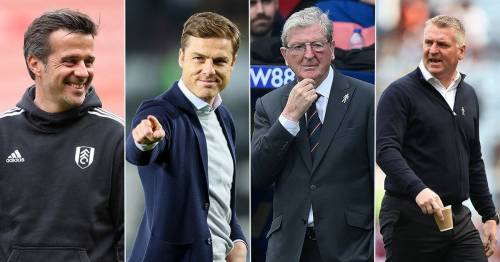 Fulham and Norwich City have become ships passing in the night. It was March 2018 when these clubs of similar stature last faced each other and that is becoming a problem far beyond West London and Norfolk, with consequences reaching far above and below in the pyramid.

Marco Silva, the latest Fulham head coach to guide the club back to the top flight, has already optimistically explained why next season will be different at Craven Cottage, even if he will not divorce from the exciting style that has broken records in their latest promotion. Vice-chairman Tony Khan, who oversees recruitment, has already spoken of the yo-yo club becoming a yo club.

At Norwich, Dean Smith will be expected to continue the pattern of bouncing back straight away with a squad that has become familiar with success and failure in equal measure, even if it is fair to ask questions of sporting director Stuart Webber’s recruitment approach last year.

Then there is Watford, straight back down to the second tier with their fate all but sealed before Christmas, and Bournemouth, back up after two years with a squad that cost £125m in a division where a couple of sides were assembled for about 1% of that number.

The financial realities of a broken system indicate that these clubs are trapped on a hamster wheel that is becoming harder to come off as those more established in the Premier League pull away and the Championship’s sub-elite find their own passage to prosperity blocked.

For many the blame predominantly rests with parachute payments, a system designed to smooth the transition and soften the blow for relegated clubs, but it is merely the base ingredient to a complex dish.

“If teams are coming down from the Premier League, they might get £43m from the first year parachute alone,” Chris Winn of the University Campus of Football Business says. “That’s usually more than all non-parachute recipients will generate across all their revenue streams in a season.

“Straight away that is a significant advantage over peers. It’s not the only reason [for yo-yo clubs] though – there’s a correlation between wage spend and results. If they have more resources they tend to do better.”

Bigger fanbases and more generous owners boost those resources but parachutes are a game-changer when in the Championship. Except when a club is promoted they suddenly find themselves up against competition that is operating on another financial plane and that brings a dilemma to consolidate or spend big – even if teams such as Brentford this season have shown an alternative is possible.

“In the Premier League the correlation is so much higher than in the Championship historically, so the promoted clubs have a choice to spend to stay up or hold back so if relegated arrive back in the Championship in the best possible position to compete again,” Winn adds. “Usually clubs take the latter option to consolidate if they end up relegated.”

A narrative has grown that Norwich, who did increase to a net spend of about £23m last summer, are being punished every second season for being a well-run club. They have been pragmatic, training one eye beyond the short-term and on ensuring a stable future, but seem less likely to survive with each visit to the top table.

Fulham have committed more on new signings, especially in the summer of 2018, but they are located in a congested market where some of the world’s biggest clubs dominate attention. Khan has previously spoken of the £100m+ outlay four summers ago as a mistake that will not be repeated and the coming transfer window will see a far more measured approach.

“Norwich achieved economic profits in six out of the past ten years,” John Purcell of financial analysts vysyble says. “That’s unusual in football but every time they get promoted they are invariably profitable. The season they are relegated they will make a loss but avail of parachute payments. A third of promoted clubs get relegated in the first season.

“If you look at Fulham’s record they ring a lot of alarm bells. The challenge is to buy well and try not to spend a humongous amount doing that but the odds are stacked against you. You’ve a one in three chance of going down and we can see from Fulham’s track record that they do tend to spend.”

And yet the Fulham squad that has torn the second tier apart this season cost £158m, far ahead of Bournemouth in second. Play-off bound Luton Town fans will take pleasure in pointing out the scale of their achievement with a squad that cost £1.5m.

Finding a solution that levels the playing field seems impossible because of the disparity between competing interests. Rick Parry, the EFL chief executive, wants the system reformed but recently admitted that they “haven’t got very far in discussions with the Premier League” adding “that’s not entirely surprising.”

There had been hopes that Tracey Crouch’s now maligned fan-led review would bring about change but despite vows from government to introduce an independent regulator it is not in today’s Queen’s Speech and opposition MPs believe the plans have been “kicked into the long grass.”

“Somewhat disappointingly [the review] sat on the fence, saying it was up to the Premier League and EFL to sort [parachute payments] between themselves and if they can’t then the independent regulator should be there as a moderator or decision maker,” Winn adds.

“No action has been taken from the review. There’s no tangible suggestion within the review and it could be some time before we have anything on the table because even a suggestion of a fairer system… if you’re coming up with a fairer mechanism to make it more evenly distributed then what were parachutes raison d'etre? To soften Premier League relegation.

“Obligatory or enhanced levels of relegation causes might be a better option to soften the blow and remove the need for parachute payments in the first place. But relegation clauses have a practical care aspect. It’s easier said than done because some players might not want to sign a contract with a mandatory reduction on their wage levels if relegated.”

The super clubs who draw significantly more global attention, therefore revenue, will not allow an even distribution model and any new system would need to be agreed by at least 14 Premier League clubs.

Instead a whole new way of thinking must be introduced where clubs are rewarded for their sustainability – as promoted by the Fair Game coalition – but, again, there will not be sufficient willpower from the biggest earner.

“You’ll always have big clubs and not so big clubs,” Purcell adds. “The key thing, a consistent theme for years, is that clubs are simply not profitable. So you have questions of sustainability. It’s rare for clubs with parachute payments to make a profit so all it does is compel you to spend more money and if you have other clubs availing of the same payments then that is your competitive set.

“Financial sustainability is an operational characteristic that needs to be changed. The parachute system proves that no matter how much money you throw at a club there will always be more to throw. The solution must go back to the most basic point: what’s required to make a club profitable?”

In an industry where the on-field winners routinely lose financially, that is the great unanswered question. The reality for English football’s middle class is that, with few exceptions, what goes up must come down.

Previous : Brave fisherman does battle with 13-foot man-eating crocodile over a FISH – World News
Next : How did Potters Bar rail tragedy happen and how many died 20 years on