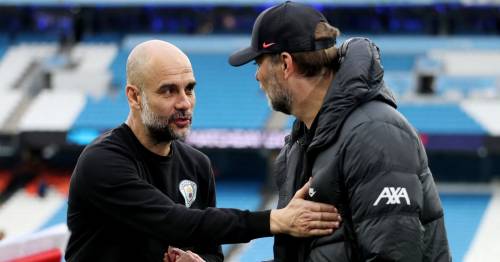 Pep Guardiola stoked the fires of Man City's rivalry with Liverpool on Sunday by claiming 'everyone supports' the Anfield club.

Coming off the back of a mixed week for the City boss, who saw his side exit the Champions League before extending their lead at the top of the Premier League, the comments have provoked a hotly-disputed debate over who the neutrals prefer.

Liverpool's quest to complete a historic quadruple suffered a blow over the weekend as they slipped three points off leaders Man City due to dropping two points against Spurs, but was it a result that left the country disappointed? Guardiola seemed to think so, arguing that the Reds' history means they are favoured by neutrals.

The City boss could also not resist a dig at Liverpool's Premier League record in comparison to his own club.

"Everyone in this country supports Liverpool, the media and everyone," Guardiola told beIN Sports. "Of course because Liverpool has an incredible history in European competition. Not in the Premier League, because they have won one in 30 years, but it is not a problem at all.

"Liverpool are alongside Manchester United as the most important team in terms of titles, legacy, history, dramas for many, many things.

"But we have since the last 11 or 12 years been there. I know sometimes we are uncomfortable, but I don't care if the people want Liverpool to win more than us. It is not an issue."

Yet how true are Guardiola's claims? Read two of our writers' opposing thoughts and then have your own say in the comments and the survey below.

Finally. Some beef tartare amuse bouche up in this title fight.

Not but a few weeks ago, the football world watched on as Guardiola and Klopp competed in their very own compliment exchange tournament. For those old-school rivalry enthusiasts crying out for angry pizza slices and unabashed digs at out-of-bounds low-hanging fruit, the mutual respect was nauseating.

But Guardiola woke up on Sunday seemingly craving violence. Now, he’s got it.

It is tempting to write off Guardiola’s retort that the world wants Liverpool to win the treble as nothing more than sour grapes. Guardiola’s ego is still healing from another baffling Champions League exit. His reign as the Premier League ’s best manager could be in jeopardy. And, let's face it, it’s the least he could do for a title race existing, lonely, on the pitch.

But Guardiola's claims are not entirely baseless.

Four years ago, football sat on the brink of its ostensible competitive death. If Manchester City clinched the elusive quadruple, as Guardiola and Co. looked destined to do during the 2018-19 season, then a new era of football had truly, and irreparably, been heralded.

The season marked City’s fourth serious attempt for the clean sweep in seven years, but the prospect rang beyond distressing notions of competitive predictability. Manchester City were cresting into dynasty territory, but they were doing so bankrolled by the billionaire brother of the ruler of the United Arab Emirates, spending hundreds of millions of pounds assembling a super team. For non-City fans, the club and its contrived success represented the growing trend in football for big money to talk loudest and its ability to transform a once mid-table pipsqueak into an international silverware glutton.

The beauty of the unprecedented quadruple was, and still is, its lack of precedence, even when attempted by England’s biggest, most ruthless beasts. It is more fun, then, to claim that a successful quadruple bid requires a sort of intangible that teams simply cannot buy.

The notion that the new rich kid on the block could waltz up with a cheque and some swanky new shoes and friends and lay siege to history is not nearly as much fun.

That is the notion that Guardiola was mocking on Sunday when he claimed a Liverpool bias permeated the quadruple bid this season. It is an article of faith in football that history matters, and Manchester City’s lack of it without the word ‘recent’ preceded by a pound sign makes them a sort of pantomime villain. Too predictable, too rich-quick, no fun.

It is the reason that, despite Manchester City’s beautiful passes and comprehensive suffocation of opponents and successive Kevin de Bruyne masterclasses, the thought of this club winning the quadruple is not nearly as palatable as Liverpool and their history and their barred-teeth attack doing so.

So, yes. There is some bias. But also, finally, some beef.

Do Pep's comments have some truth? Have your say in the comments.

Whilst Guardiola may only have joined Man City in 2016, it’s difficult to imagine that he hasn’t heard the infamous chants about Steven Gerrard’s slip that cost Liverpool the title in 2013/14. Surely that, on its own, is evidence that not ‘everyone’ supports Liverpool in this title race?

After all, should Kevin De Bruyne fall over to gift Wolves victory against Man City on Wednesday night and hand Liverpool the advantage in the title race, it’s difficult to imagine the rest of English football joining forces to sing about the incident at every game City play next season in the same way they did for Gerrard.

Obviously, there were mitigating circumstances, such as the fact the Reds were still chasing their first Premier League title at that point, but it’s a good example of the amount of schadenfreude that’s often derived from any poor result Liverpool suffer.

Whilst the Reds’ rich history does mean there is a high number of their former players working in the media – and Guardiola is correct that many do not do anything to try and hide their bias – that does not automatically mean neutrals will be supporting the Anfield club. In fact, quite the opposite – the sort of partisanship shown by the likes of Jamie Carragher and Steve McManaman can often turn a neutral off from rooting for a team.

Indeed, scroll through social media during a Liverpool game that Carragher or McManaman is commentating on and you’ll soon find yourself overwhelmed by neutrals criticising their commentary for being too biased.

The fact is, Guardiola has mistaken passion for overall support. Liverpool have always been a Marmite club, with their history of success meaning people either love them or hate them.

Can the same be said for Man City? They play excellent football but the highly-structured nature of their play, which often suffocates opposition teams, is not always that interesting to watch as a neutral, which, combined with the fact they can outspend any team in world football and have pretty much dominated the domestic game for a decade, can lead fans to feel rather emotionless towards their success.

A smaller, less vocal, fanbase than Liverpool’s and a difference in media representation, with much-loved Micah Richards the biggest name pundit who openly supports City, means that most neutrals probably feel a general apathy towards Man City's success – due to the club’s money, neutrals may not enjoy them winning, but they also do not command the same level of hatred that the rest of the Big Six do.

You've read what our writers think – now give your own thoughts in the comments below.