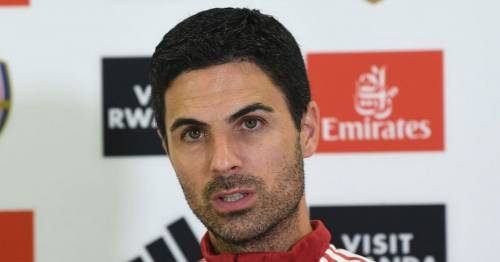 Mikel Arteta believes Arsenal are in a "really good place" after picking up ten points from their last four Premier League games.

The Spaniard's squad lacks depth, however, and injuries throughout the campaign could send the Gunners back to the bad place they have found themselves in previously.

Arsenal's recent revival earned Arteta the Premier League Manager of the Month award for September and he is hoping they can keep pushing in the right direction.

Speaking to the club's website, Arteta said: "The squad is in a really good place.

"Obviously after the window closed and we knew the squad that we had, had done a lot of the transfers and deals we wanted to do in the summer.

"I think we have to be really happy and positive about what we have."

Arsenal spent more than £140million during the summer and are a stronger unit as a result – but they aren't prepared for a flurry of injuries.

The team lost their first three Premier League games of the campaign to Brentford, Chelsea and Manchester City – and that was partially down to having absentees.

The defence was particularly shaky during the opening weeks, with question marks raised over Pablo Mari, Calum Chambers, Rob Holding and Sead Kolasinac.

Speaking after the 5-0 defeat to City, Ian Wright said: "I'm looking at the defence and it is a disaster class. Between Cedric, Kolasinac, they are all over the place."

And Rio Ferdinand told his FIVE YouTube channel after their 2-0 loss to Chelsea: "He [Romelu Lukaku] bullies people, he was like a sixth former playing against first years.

"That's what he made the Arsenal centre-backs look like, they didn't know how to deal with him. [Pablo] Mari was an embarrassment, he didn't know what to do."

The defence has looked steadier since the return of Gabriel and White, conceding just one goal in their four league outings.

But more injuries could rock the boat and Granit Xhaka's knee injury – expected to keep him out for the rest of the calendar year – is a warning for Arteta.

One advantage is the lack of European football, which will allow Arsenal's strongest XI to get plenty of rest in between games.

Arteta recognises the importance of this and wants to keep every member of the squad involved, away from the sidelines.

Where will Arsenal finish in the table this season? Have your say below.

He added: "The challenge now is to keep everybody on board together and fulfilling the role that each of us has to do in every moment, and through the season that is different.

"We don't have European games and for me the key is to keep the unity of the group together and players feeling valued at all times."

Success this season, though, won't be achieved simply by unity and those on the periphery.

Unlike other members of the so-called "Big Six", Arsenal need their best players to stay fit if they are to stay in the good place.

Previous : Staff, students in this school board are learning about Islamophobia, but true test comes in real world
Next : Premier League power rankings: Top 10 forwards of the 2021-22 season so far