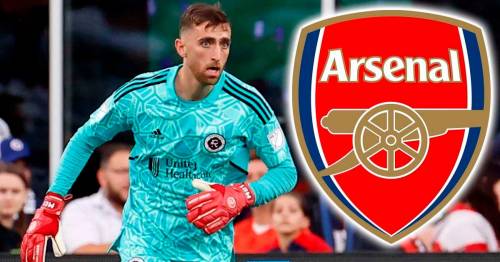 Arsenal are about to welcome a new goalkeeper to north London for a second straight summer, with Matt Turner set to provide competition to Aaron Ramsdale between the sticks.

Turner has said his goodbyes to New England Revolution, where he has spent his entire professional career, and is set for a Gunners medical before joining up with his new teammates for pre-season. The 27-year-old played more than 100 Major League Soccer games for the Revs, and could find himself starting for the United States against England at the upcoming Qatar World Cup.

Brad Friedel was the Revs manager back in 2018 when Turner made his MLS debut, and is uniquely placed to give his verdict on the highly-rated keeper. And the 51-year-old, who made 450 Premier League appearances during his career, has backed his compatriot to find his feet.

"Matt's a really calm kid, he'll settle in fine," said Friedel, speaking exclusively to Mirror Football on behalf of 888sport. "He's a tremendous shot-stopper, he's going to be well liked in the changing room no doubt, he's a hard worker and a very good professional.

Friedel was appointed New England Revolution manager ahead of the 2018 MLS season. Former Southampton keeper Cody Cropper had been the Revs' number one the previous season, but the new boss took a chance on Turner – a man with no previous Major League Soccer experience – and quickly uncovered a top talent.

"For Matt, it'll be a different pace of game that he's going to have to get used to, just like every other foreigner that goes into the Premier League," said Friedel, who made his own Premier League bow with Liverpool at the age of 26. "This has nothing to do with being an American coming from MLS – the Premier League is just fast, and it's strong and powerful and different from other leagues in the world."

Can Matt Turner take Aaron Ramsdale's starting spot? Have your say in the comments section

While Friedel has no doubts about Turner's ability, he recognises there are additional pressures which come with playing in the Premier League. Arsenal's new boy has never played in a top European league, let alone in the English top flight, and his only major tournament experience came in the 2021 CONCACAF Gold Cup.

"I have zero question in my mind that he'll be able to deal with all the shots, the crosses, and he's very, very good," Friedel continued. "What Matt's going to have to get used to is all the eyes being on him when he gets his chance to play.

"It's different than MLS. We all make mistakes, and especially as goalkeepers the best of the best are the ones that can put those in the back of their mind and just continue on playing as if they hadn't made a mistake.

"This will be the first time Matt will have to deal with literally billions of eyes on him, and you have to take it in your stride when you do well also. It's not just the mistakes. But he's such an even-keeled character, I think he'll do just fine with all that."

Ramsdale will be a tough man to dislodge
(

If Turner does end up establishing himself as Arsenal's first choice, it would mean following the example set by current incumbent Aaron Ramsdale. The England international arrived with Bernd Leno ahead of him in the queue, but quickly made the starting spot his own.

Leno has been linked with a summer departure which would leave Ramsdale and Turner battling it out. And Friedel acknowledges this would represent a change to what his compatriot has become used to.

"This is going to be a battle for him, which he hasn't had for a fair few years now," Friedel said. "He has for the national side, battling in and out with Zack Steffen, but he has been the out and out number one for a few years now so this will be new to him. Nothing that he'll shy away from, and nothing that will affect him, it's just he's going to have to go in and try to win a starting position against another very good goalkeeper."

Within a few weeks of the season starting, we should have more of an idea of whether Turner can force his way past Ramsdale. And then, on November 25, we might even have the unusual sight of two Arsenal keepers up against each other in one World Cup match.

Brad Friedel was speaking on behalf of 888sport. Head to 888sport for the latest Premier League odds.