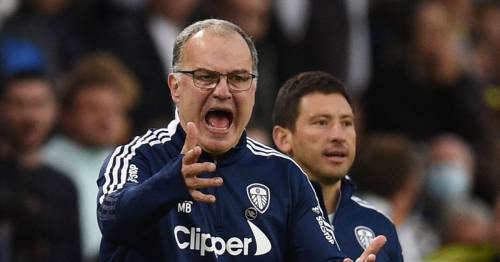 Marcelo Bielsa claims Leeds’ Brazil star Raphinha is on the radar of “all the big clubs in the world”.

Liverpool, Manchester City and Bayern Munich are tracking Raphinha because of his red-hot form and Leeds plan a second round of contract talks to tie him down to Elland Road.

Bielsa has welcomed this move and says the winger, who is already under contract until 2024, has become Leeds’ best player.

“It’s a great decision,” said the Leeds boss. “Raphinha’s the best player in the team in all the senses.

“Physically he’s the best, technically he’s at the level of the best and his interpretation of the game is very wise.

“He’s within the group of such a powerful nation as Brazil, he shines in the Premier League and he has the attention of all the big clubs in the world.

“All of those things are something you guys know as well. Nothing I’m saying is new. As a result, the decision of the club can only be valued.”

Leeds have ruled out selling Raphinha this month and the Samba winger is happy to remain at Elland Road because he is settled with his partner.

Leeds are finding it harder to hang on to their younger players and Cody Drameh joined Cardiff on loan this week because he felt he would get more playing opportunities there.

Bielsa blames himself for Drameh’s unwillingness to stay when he is grappling with an injury crisis and he handed him five appearances this season.

“I didn’t think he needed to play games elsewhere,” he said. “He was a player who was very necessary with all of the absences we have, but he preferred to go and play outside of Leeds.

“In a situation when opportunities for youngsters have increased clearly, in this case Drameh would prefer to experiment outside our team.

“I consider that position valid and I don’t think it makes sense to oppose him.

“What I imagined as a great opportunity, he imagined it in a different way.

“It’s more important what he thinks than what I think. I don’t think it’s convenient in this situation to oppose a player.”

Bielsa feels Drameh’s determination to leave Leeds when he felt he had given him a golden opportunity is typical of the attitude of young players.

“A lot of the young players who have come into the first team have had the desire to go elsewhere,” he said.

“Evidently what I propose to them is not what they desire.

“I don’t criticise it or condemn it, it doesn’t disappoint me, but clearly I calculated things wrong because what I consider a great opportunity, those who are benefiting from that position, they prefer to abandon the club, looking for another type of competition.

“Evidently, what I imagined as a great chance and opportunity, they don’t.

“Perhaps I overvalue the fact you are in a 20-man squad in the best league in the world.”